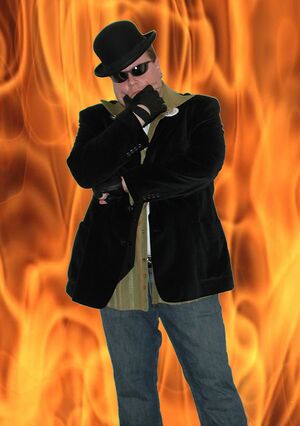 Alias(es):
Hank
Steve
Joe
Chip
Jesus
The Croatian
And many, many more....

Physical description: Saul can generally be found wearing his trademark bowler, as well as a pair of sunglasses and some fingerless gloves. Sometimes wearing an actual suit, he used to be more often can be found in a black, velvet blazer along with some jeans and boots ... though he does break out his bowling shoes on occasion. Lately, he wears a scuffed flaming "S" ball cap and leather jacket.

Considered a "Friend of the Family" and known as "The Scourge of the Infernal."

Unknown - But she sure is a hottie...

Saul is infernal.
Saul is a Baali.
He is a member of The Dead Man's Hand.
Saul is so bad ass that he once summoned up a demon and (( SA'd )) it to death just because he could - Overheard in St. Louis.
Is more insane than most Malkavians, and passes the sickness to his Childer.
Likes to eat Tremere.
Was once addicted to Malkavian blood.
He can't stop killing, which is why he gets locked up from time to time.
Saul and Jakob Phuridae are different personalities of the same Kindred.
Under those sunglasses, Saul has beautiful eyes.
Saul has a tremendously potent magical item in his possession: a shimmering glass key. It is said that not even Saul knows what is is supposed to unlock.
The sunglasses hide Saul's infernal taint.
Eats the silica packets in bags of beef jerkey. Don't you tell him what he can and can't eat.
The man can wear a hat.