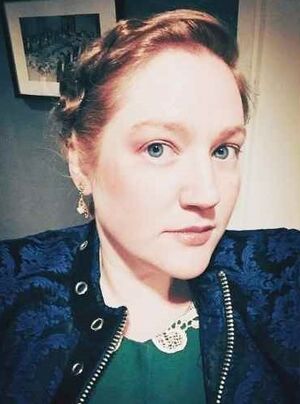 Despite this quietude, the later-20-somethings Kindred seems to have a way about her - perhaps it's her very visible ties to her Humanity;
or
Perhaps it is her innate sense of magnetism, often brought out through cordial words and facial features capable of putting many others at ease.

- Ainsley is known for being the key, publicly-known Kairos advocating for the “Changed” Brujah and their progeny within the Clan and Camarilla. Her visible appearances at Rants and National events furthered this advocacy, which culminated in the announcement of the Changed and their Childers’ acceptances as Brujah by Manuela Cardosa Pinto, in the Domain of Baltimore during the Glitter & Gloom gathering in March of 2016.

- Ainsley Good is a former Archon to the Brujah Justicar's office [Clan Brujah] and was brought into service under Justicar Manuela Cardosa Pinto in August 2016.

- Ainsley Good was noted in an announcement to the Camarilla-at-large as having been "destroyed due to the actions of demons and those under their command while in the line of duty" on August 10, 2017.

- Ainsley Good was then noted in an announcement to the Camarilla at-large on February 23, 2018 as not only alive, but thanked and recognized for "the discrete services she has provided over the last few months."
In the same announcement, Ainsley was released with respect from service as an Archon to Manuela Cardosa Pinto.

- Ainsley Good was announced as an Archon to Justicar Lotharius of Clan Tremere on October 16th, 2020.

Wiki Gardening: I am comfortable with players adding appropriate, non-vulgar rumors. Please use the - *I heard a rumor - beginning per the formatting below.