Physical description: A bit over six feet tall, with a light brown pony tail, goatee, and glasses, Virgil nearly always wears a well-tailored suit and sports a fashionable cane of some sort. He also generally has a healthier pallor than most Kindred [OOC: Blush of Health] and is quick to smile. 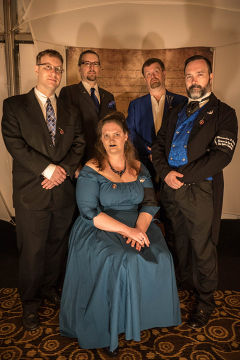 Virgil moved to Indiana from Great Britain in 2004, rapidly acquiring Primogenship in the Court of Vivianne de Montrachet. He later served as Keeper of Elysium and then Seneschal for successive Princes of Bloomington, Indiana before moving to San Francisco, where he soon took up the position of Keeper and then Seneschal in the Court of Daniel Book. In late August of 2009, he seized Praxis when Book stepped down, and he has been Prince of the City by the Bay since.

He is an active correspondent, posting fairly frequently to the Camarilla fora and is known to be fairly well-spoken. [OOC: Reputation: Articulate Politician]

At the "Convention of Fire" during the 2011 New Orleans Grand Masquerade, Virgil was the Camarilla Ventrue delegate. At the Bay Area Grand Elysium of 2013, he was recognized as a Sovereign Prince.

He spoke in favor of a Child of Haqim Justicar at the Baltimore Conclave of 2015, and in May of that year, during the Bay Area Grand Elysium, stripped Jaroslav Pascek of significant standing for killing a Mandarin of the Kuei Jin Court of San Francisco on a (now former) Elysium.

In 2018, at the May Grand Elysium, Virgil publicly blood hunted Jaroslav Pascek in the Domain of San Francisco in conjunct with the Judicial Conclave being held in his Domain.

To outward appearances, he is rather well-respected by his Clan. Virgil seems to have remarkably congenial relations with neighboring Princes - Dorrian Grey, Sunny, and Alejandro Patron - and much of his Court. He also seems on reasonably good terms with local archons, notably Michael Crison and Michaelangelo Archadia.

Oddly, Virgil doesn't seem to have many public or visible enemies. He does have a significant Kuei Jin presence in his Domain, however, and the Princes of San Francisco have long had a rocky relationship with the Eastern Kindred. He has had some somewhat heated exchanges on national fora, however.

Ted Crisp from Better Off Ted, Michael Bluth from Arrested Development, and a mix of both Liz Lemon and Jack Donaghy from 30 Rock. Basically, a slightly off-kilter Only Sane Employee.

Virgil Deems at the Roast. Spoiler alert: it ends with a quote!

This is something it would be far more appropriate for others to fill in, and I invite others to do so. The following have all been suggested or added by others: