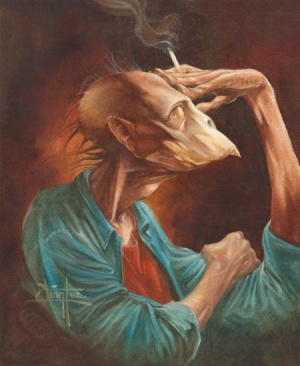 Physical description: Cock Robin seems to generally eschew Masking himself, meaning that his Clan's hallmark physical flaws are plainly visible most of the time. His nose and much of his face have distended into a massive beak, making it remarkably difficult to understand what he says, meaning his archons will generally translate for him when he speaks in public. His limbs also seem stretched to odd lengths, making him move awkwardly.

As a skilled silversmith apprentice to Paul Revere, "Robin" struggled to survive in the early days of Colonial America. He was embraced in the third year of the French-English War, and abandoned by his sire to rely on his dogged survivalist instincts. Though he fought in the revolution out of a sense of duty, he had one too many close calls and decided to adopted a policy of avoidance. After the war, he quietly slipped his way through early Americana finally landing in Rhode Island, where on one fateful night he witnessed the midnight arrival of a black-sailed galleon, captained by a vampire named Warwick.

For over a century the fledgling neonate endured this new tyrant's reign of terror until Cock Robin's sire resurfaced, sending word to his childer that a resistance movement was underway. With natural leadership and a will to succeed, Cock Robin was instrumental in crushing the bulk of Warwick's forces in New Hampshire. The battles were bloody and cost many kindred their lives, however, Warwick escaped the trap set for him. Now, only Cock Robin remains as the sole counterinsurgent surivor - an unsung hero.

Archons in Service to the Nosferatu Justicar

"Listen, guys, do you think it would be out of line to offer to teach him how to Mask his appearance?" Deacon St. Croix

"Why wasn't that guy at the Gangrel Clan meeting?" Kurran DeSylvia