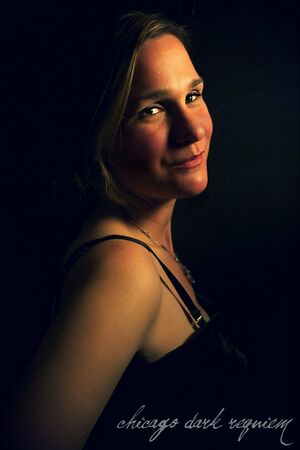 Physical description: A woman somewhere in her mid-twenties standing between 5'4" and 5'7" with blue eyes.

Victoria is known as a theatrical scenic and technical designer as well as being the CEO of the high end fashion company Hunterwear (fame 5). Along with her reputation as an artist and managing charitable projects, she has a reputation of being business savvy, especially when dealing with finance. A key player in high society circles, she always attends the best parties, and has the insider gossip.

A long time Chicagoan she has lived through multiple changes; from the end of The First Family, to the infamous House Malice Sabbat Siege, and finally rebuilding the city after Justicar Masko released Chicago from under Ordeal.

Despite the infamy associated with her last name, Victoria managed to work her way up in Chicago and held multiple positions within the court including; Harpy, Toreador Primogen, Keeper, and eventually Prince. She seized praxis from Vanessa Leeds aka Liana Vasco. During her time as Prince she hosted the famous Toreador May Event in 2003. At that same gather she threw Clan Giovanni out of Chicago.

In 2003, shortly after the Toreador May Event, she went missing for several years. Supposedly kidnapped by her cousin Robin, she was assumed dead after her haven was found completely trashed and all attempts to find her failed. In 2005 she reappeared at the Midwinter event but no one seems to know what happened to her during those two years. From there until September 2008 she was occasionally seen at gathers. After the notorious Art Institute incident, she was once again a staple in the domain, resumed the position of Primogen, and was heavily involved in the repairs to the Art Institute.

At the 2008 Conclave Victoria was announced as an Archon to Maris Streck.

Currently she is in service as an archon to Justicar Maris Streck.

"Clever neckline, Victoria." - Jack the Barber
"Mr. Giovanni, by the time I am done with you and your family you will not even be able to buy so much as a stick of gum my city....Giovanni, go bye-bye." - Victoria Hunter 2003 Chicago May Event
"Jack the Barber is in the midwest somewhere, harassing Victoria Hunter..." - Susanna Angel LaRouge
"Victoria Hunter has an ass that could launch a thousand ships." Jacen Pompeii
"Fucking really? Really? Why don't you try that again."
"Stop nodding your head at me like a doggie on a dashboard and use your words."
"It's not what you think."
"I've heard enough about the Hunters to be afraid of her." Unknown Brujah
"Archon Hunter you can't die, you wear the best necklaces." Justin Lazarion
"She has legs that would make a gay man cry out!" Seamus MacGregor
"Some of these favors are enough to let me touch your arse." Irish
"Hunter why are you dressed like a Harlot?" Archon Knight
"Archon Knight, the modern term is prostitute or hooker." Victoria Hunter

The heels of her shoes are all made of oak so when she steps on a heart it stops for her.
Was a member of The DMH.
Was a member of the Syndicate
Rumored to have once been engaged to Jon Sebastian
Is on Jack the Barber's hit list.
Rumored to have once been involved with Justin Thorne.
Executed Tobias Hunter and Felix Hunter.
Her archonship is form of penance for her sire's crimes.
Might not actually be part of Clan Toreador.
Has great necklaces.
Zio! was willing to marry her for tax reasons.
Katja Nothing is her sire.
Threw the Giovanni out of Chicago when she was prince.
Cannot be in the same room as Zio! without yelling at him.
Victoria has the largest bullwhip collection in North America.
Rumor has it Jacen Pompeii was once a suitor and took her to the opera.
Is a Setite.
Ice Princess/Queen
Is secretly in love.
Victoria has heavily augmented her memory with Forgetful Mind to forget the worst of what the DMH did to her.
Jack Sebastien owes Victoria a quarter every time he says, "Giovanni go bye-bye"
Has an addiction to Starbucks coffee; she is rarely seen without a cup of coffee.
Katja Nothing taught her everything she knows about men, so really it's a miracle she has never been married.
Recently ended her torrid love affair with Jacob Black. She appears to be heart broken.
Was recently seen holding hands with Jacob Black in Baltimore.
Was recently in a meeting where she demanded Jacob Black be allowed to stay with her.
Seamus MacGregor has been openly courting Victoria for a year.
Is incapable of keeping a man.
Hugo Valentine rushes to her side every time he sees her like a lost puppy.
Enjoys beaded curtains as gifts from those seeking her attention.
Is not actually a Ventrue.