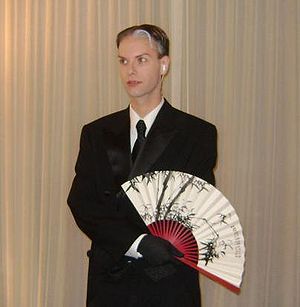 Alias(es): Invidia (Used during time of Service as Archon to Titus Petronius Niger)

Adrian was a slender, feminine young Mediterranean man with a shock of white on the left side of his hair. He always dressed himself in elegantly tailored finery, and was never without a hand-fan. He seemed only half-awake most of the time, and often seemed dreamy and distant. When something roused his interest, however, he could lock onto it with unnervingly keen interest.

Gifted with an *Enchanting Voice*, Adrian was an opera star of some cult Fame. Mortals paid a small fortune to hear him sing, and Kindred are rumored to pay with their very sanity for a private performance.

-Acknowledged by Clarissa St. Claire, Prince of New London Connecticut. Granted for successful time spent under the Accounting and bravery in defense of the Domain.

-Revered by Jason Lee, former Prince of Kenosha (now Archon to Cock Robin). Granted for many years of devoted service as Harpy.

-Fierce by Jeremiah Nevermore, former Prince of Sheboygan (deceased). Granted for felling a Sabbat war-party by using their own arsenal against them in defense of an Elysium.

-Cherished by William Wallace, former Prince of Green Bay (deceased). Granted for assisting in driving a potent Tzimisce Elder from the borders of the Domain by raiding its haven and destroying its containers of soil.

-Loyal by Charles Rikker, former Prince of Green Bay (fate unknown). Granted for risking own life in defense of a Prince of the Camarilla.

-Calchean by Mark Richardson, Virgil Deems, Marcus Jovan and Kathrin Braddock. Granted for service during the time of the Sabbat Siege against Orange County.

It is said that Adrian Serra was Embraced and raised on the East Coast during the time of the American Revolution. They say that he descends from a rare Malkavian lineage, and can trace his line back to the Greek Muses. Adrian is known to have spent a short time in the Courts of Villon and Queen Anne during the late nineties after making his way out from the heavy hand of his Sire. In 2003, he left Europe with little warning, making a home for himself in Kenosha, Wisconsin. His reasons for the move largely remain a mystery, but his political career was anything but quiet. Almost immediately Adrian seized a seat on the Primogen Council, and was soon elevated to Harpy.

Adrian remained Harpy for years in Kenosha, steadily building a good reputation and an impressive army of allies. He was forced from the city and his position during a hostile DMH takeover in 2006. Adrian rose to prominence next as Seneschal of Green Bay, where he would remain until ascending to the role of Archon to the Toreador Justicar Titus Petronius Niger. It is said that he stepped down after a few years of service because the position wore on his compassion.

Adrian came to Los Angeles in 2009. Rumor has it, he was drawn there by an awakening Methuselah. Shortly after making a name for himself in LA, Adrian returned to the role that made him famous, Harpy. He is said to have orchestrated every major shift in power after his arrival, or at least contributed heavily to their planning and execution.

In 2010 Adrian boldly challenged Dominic the Brujah for Praxis, and became the Prince of Los Angeles. He ruled the Domain for one year, and saw the area through turbulent times the best that he could. However, the Beast took a visible toll on Adrian. He saw to a change of power, and ensured that the Domain would be well looked after before walking away from the Jyhad in 2011.

His present whereabouts are unknown.

None known. It was rumored that Adrian may be (or have been) a member of the Syndicate or the notorious Dead Mans Hand.

Once, there were many. Now, most have met their Final Death or moved on with their lives since Adrian went missing.

Nearly all have met their Final Death.

None. Each of his line only give The Kiss once.

-Luba Luft from the story "Do Androids Dream of Electronic Sheep" by Philip K. Dick

-The way that Ingrid Bergman sounds when she speaks

Amon Maximov Thorn "Adrian, if you had to choose between a harp seal pup and a chicken, and one of them had to die, which would you choose?" Adrian "The chicken." Thorn "AH-HA! You'd let the baby seal live just because it's cuter, right?" Adrian "No." Thorn "Well... what?" Adrian "I would save the seal, for it is more rare." Sebastian Marconius "Point for Adrian."

Adrian to a Neonate being returned to the Accounting "Please, tell us, is that hideous outfit you're wearing a part of your punishment, or did you put that on of your own volition?"

-Adrian met his Final Death. He lost his mind in a struggle with his Beast and was put down by Ophelia and the other agents of Titus Petronius Niger.

-Adrian has not died, and lives under the cover of a new identity. He hides in Human society, and maintains contact with few (if any) Kindred.

-Adrian met his Final Death. He was murdered out of revenge by former Prince Dominic of Los Angeles.

-Adrian has not died. He has been working with the Children of Haqim.

-Adrian met his Final Death. He was murdered by Paul Walker. Reasons given for this vary.

-Adrian has not died. He has become an apostate of Set.

-Adrian met his Final Death. Like so many of his allies, he was murdered by the Followers of Set.

-Adrian was actually a woman that dresses like a man.

-Adrian was the secret lover of Archon Aetius.

-Adrian was the secret lover of Frances Merevein.

-Adrian was the secret lover of a Nosferatu Anarch named Creeper.

-Adrian could strike a Kindred dead with his singing voice alone.

-Adrian was sympathetic to the plight of the Anarchs, and had many allies in the Movement.

-Adrian was not as kind as he seemed. He was really a psychotic monster that played with and discarded others like toys.

-Adrian and Paul Walker had an intense and fiery relationship. They were close friends, bitter rivals, and everything in between. The only prank Adrian is known to have pulled was on Paul. After a long-running feud with Evangeline Luna cooled, Paul remarked to Adrian how boring his life was sure to be. Adrian offered him conflict, but Paul brushed Adrian off with a wave of his hand. For years, Adrian undermined Paul, damaging his reputation with lies and exaggerations. Paul confronted Adrian about this in Milwaukee. The punchline was delivered, and it was pointed out that Paul had actually requested conflict of this nature. Although Paul (and perhaps some of the Kindred assembled) may have learned a lesson in careful consideration of what one wishes for, the rift in the once close friendship between Paul and Adrian never fully mended...

-Adrian was a actually a man that dresses like a woman.

-Adrian was really Helen of Troy.

-Adrian was a cats-paw of Helen of Troy.

-Adrian had many secret and not-so-secret lovers, frequently at the same time.

-Adrian was neither a man, nor a woman.

-Adrian knew True Love not once, but twice. Those memories were stolen away by the same Kindred.