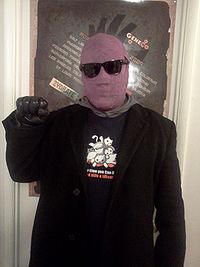 Physical description: Slink's appearance varies. A lot. So does his height, weight, and smell.

Very little is known about Slink, except for two things.

1. He was born and raised in Chicago. 2. He claims to not be as tall as he looks.

... Let's be honest. When you're this kind of information trader, you don't keep friends, you keep Customers.

I built this concept from scratch and then Leverage stole it with Alec Hardison. http://tvtropes.org/pmwiki/pmwiki.php/Main/InsufferableGenius

Slink is a Nosferatu in the fullest sense of the word and usually has updates for me before they even show up here.

He has access to just about every type of information you could imagine.

I have no doubt that someone is trading him information from here, as well, but he never surrenders a source.

"Slink is like talking to Faeries in Dresden novels. You never share, and you never accept something he offers without paying for it first." --> Jack Sebastien, privately.