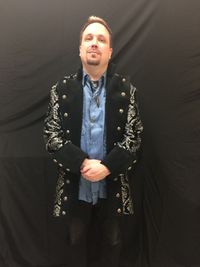 Rook is a handsome youngish-seeming man with short cropped brown hair tipped by blond highlights. His eyes are blue, ranging from ice cold to rather entrancing depending on his mood. While handsome enough, his true nature is in his presence and his interactions with others. He has a charisma and charm that can easily sway a crowd, although it is tempered by a slight coolness of a not quite perfectly human seeming. He tends towards exotic wear, enjoying flamboyant coats and jackets. He is certainly not afraid to stand out in a crowd.

Rook speaks very little about his living history, but talks of wars past as if he were present. This certainly includes World War II and earlier. His earliest Kindred appearances were in the Courts of France in the early to mid 1900s, and on the battle fronts of New York City during the mid to late 1900s as the General of one of the main strike forces of the Warlord of the Camarilla. When distracted or in a mood, he sometimes starts speaking with a mild French accent.

Rook arrived in Annapolis with his Childe, Harrow, who was still under the Accounting in the winter of 2008. War weary and very low on Humanity, Rook tried to stay in the background - but his nature refused to let it happen. He rose to become Primogen, then Harpy - where he presided over the Annapolis Conclave of 2010. He then became Seneschal and finally Prince of Annapolis in 2012.

He is also known for hating the Infernal and the Sabbat. He has taken a very public stance against Clan Tremere, blaming them for several of their more well known criminals.

He doesn't belong to any known coteries.

"Don't Fear the Reaper," by the Blue Oyster Cult
"The World is Growing Loud," by Covenant
"When they Come for Me," by Linkin Park
"Bad Things," by Jace Everett
"Afterhours," by Ego Likeness