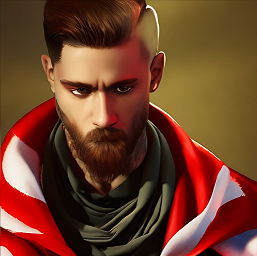 Concept: The sword and shield of the Camarilla, the wandering Legionnaire

Physical description: Looks like an Irish ginger, but that's probably just his usual Mask of 1K Faces. He wears a tan ACU jacket (he keeps the sleeves rolled down ever since he got back from Annapolis), some kind of metal band t-shirt (usually Megadeth), blue Levi's and bright orange Converse hi-tops. He has a long red scarf wrapped around his neck, black sunglasses, and a ball cap for whatever sports team is local to where he is that night. He wears his facial hair in a shortish van dyke and his cheeks have what looks like a weeks growth.

- Dauntless by Prince Angelo of Philadelphia

- Empowered as Archon to Justicar Lotharius

- Feared as Archon to Justicar Lotharius

- Loyal as Archon to Justicar Lotharius

- Dignified as a Dignitary of the Camarilla

Nasir showed up in the San Francisco Bay Area some time in 2008, mostly residing in Santa Rosa. There, he served as the Sheriff under Prince's Oz and Sangria de Corazon, Scourge and then Sheriff under Prince Warchild, and Sheriff under Prince Gray. He assisted in clearing Sabbat and demons from the area during the time before Assamites were fully accepted in the Camarilla. The year after his own Probationary Sect Membership was lifted, he assisted the Domain of Berkeley in taking down the Neo-Carthaginian Jean-Baptise and routing their numbers from nearby Napa County. For this, he was awarded the personal domain of Lake County and St. Helena over which he immediately declared an uncontested Praxis. The next year, the elder Toreador Lord Boreal awoke and quietly challenged Nasir's Praxis of Lake County and St. Helena and Nasir relented. Not wanting to cause a fuss, he left the area and wasn't seen or heard from for the next year until the Grand Elysium of San Francisco in 2017 where he was stripped of two measures of standing for abandoning his Praxis. Unfortunately for Nasir, his time on walk-about coincided with the disappearance of many of his clanmates and required him to answer several pointed questions from the Furies over his loyalty to the Camarilla. After they were satisfied, he was quickly recruited into the Ivory Legion where he has participated in ops across the Americas. Among these, he helped in the clearing of the Ebon Legion in the Amazon (he was awarded status by Prince Angelo of Philadelphia) notably clearing the field of Fomori with several of his clanmates to cover the evacuation of the wounded and protecting the body of a fallen comrade, standing against several Balam. He was also present in Annapolis during the execution of the Blood Hunt against Annalise Rowland where he dealt the final blows on two Black Spiral Dancers- one while stuck in the gauntlet- in what was described as "a whirlwind of steel" by some who were there (for which he was awarded standing by Prince Virgil Deems). In early 2022, he was named as the first Assamite Archon to the Tremere Justicar, Lotharius.

"..." - Nasir
"Some of us are not so cavalier about death as others." - Nasir to a Ventrue Primogen who was questioning why Nasir wouldn't just go kill something.
"You did all the work, I was just being an emotional support Assamite." - When his Servire got status from General Tegyrius
"Are all Cainites so insufferable?" - to Angel of Caine Abhartach