From Camarilla Wiki
(Redirected from Zio!)
Jump to: navigation, search 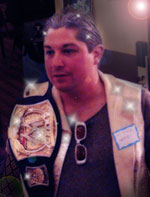 Born in Miami, Florida, Zio! has stated that he was a soldier during the first Gulf War and that he was Embraced shortly after returning. He is noticably Puerto Rican and has shown a very deep connection to his birthplace, which he has stated he cannot go back to due to Setites. The details are unknown.

He arrived in Iowa City in 2006 with his broodmate (name and whereabouts unknown). His flamboyant attitude and demeanor were immediately met with disapproval by then-Prince Philip Michael Kennedy. In one night, Zio! was given $1,000,000 and Embrace rights to leave. As of yet, those Embrace rights have not been "cashed in."

Zio! most notably arrived in the "spotlight" during the seige of New York in late 2006. As a founding member of the team "Whisky Tango Fantastic" with such Kindred as Francis Merevein, Jacob Tallfeather and Obsidious, they were instrumental in many of the great battles that happened during the siege. It was during this time that he began to study the Sabbat in some detail, going so far as to disappear from time to time on "hunting trips" with Francis, returning with more knowledge about them. He was the last soldier to remain in the New York area after all others had given up hope. In 2007, he came to the Grand Elysium in Columbus to meet and debrief on the situation in New York. On an excursion to rescue the Chief Archon to the Brujah, Simon Churchill, Zio! was kidnapped by the Sabbat. He was retrieved the next day and spent 6 months in rehabilitation under the care of Justicar Jaroslav Pascek.

Upon awakening, Zio! showed a streak of aggression that had not been apparent before. It was shrugged off and he quickly moved up the rank and file of Kindred society, most noticeably in Cedar Rapids where he was alternately Scourge, Sheriff, Keeper, and Seneschal. While Sheriff, he displayed an obvious dislike for the Malkavian Harpy, Saffron Lake. Repeatedly commenting on her abuse of Brujah and her tendency to extort boons from them, Zio! repeatedly told his Clan and his Commanders that he would kill her, to no response.

In Black Hawk County, while he was Seneschal in Cedar Rapids, he actually did kill Saffron Lake (then a citizen of Iowa City) by extinguishing a cigarette on her. In the resulting uproar, he was Blood-hunted in Cedar Rapids while he was at the Grand Elysium in Columbus. Further investigations into the motivations for his actions showed he had Post-Traumatic Stress Disorder. He was introduced to therapy sessions with then-Archon Invidia (now Adrian Serra), who improved his condition and made him "acceptable" for society.

It was also around this time that Zio! made amends for Saffron's death with Her Lady Maris Streck in a meeting with Jacob Black and Garrett Dannington (there to represent Clan Brujah's interests). No one save those three knows what happened in the meeting, but the results were Zio! working for Jacob and Garret handing Jacob $5.

The next two years of Zio!'s story involved service to the Malkavian office. It was also during this time he co-founded Team Fail, a coterie of warriors who would come and help fight the Sabbat.

On New Year's Day 2010, Zio! organized the domain of the Twin Cities to remove Chester Black from power by removing his Acknowledgement. Then, he claimed praxis, facing an Ordeal delivered by Archon Gerald the Sane on behalf of Justicar Cock Robin to atone for the crimes Chester Black had committed. He was an unusual Prince, encouraging his citizens to "stop being vampires" as well as espousing cooperation and teamwork. Three months later, the Ordeal was deemed completed and Zio! stepped down as Prince, stating he was not a peacetime Prince and that he had accomplished what he had set out to do.

The Gayggle (removed from this group)

Not fond of Setites and it seems to be reciprocated.

Wild Hunted by the Sabbat.

Other childer are mentioned but have not been seen.

Zio! has been known, at one time or another, to follow the below who he has seen as his "Generals":

(walking into his first public Brujah rant) "Alright, who wants your ass kicked by a faggot?!?"

"Actually, the Sabbat's status system is BETTER and once we utterly defeat them, we should adopt it."

(to a room of 3 Archons investigating him) "Why don't we have a Black Hand?

"It's as if someone crossed Dirty Harry Callahan with a bitchy cheerleader" - Augustine St. Just

"That guy is...horribly gay. Not that there's anything wrong with that. I thought they could dress....no?" - Johnathan Gwynn

"I loved you. I hated you. I fought against you. And it took your death to understand you." - Fifi!