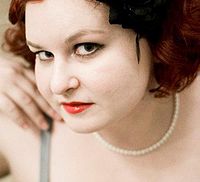 She's been everywhere and nowhere. Always in the background, always the source of the cynicism, dry wit and scathing snark from the back of the room. When she'd gotten off the plane at O'Hare International Airport in September of 1997, she'd had a thick Russian accent, a moderate grasp of the English language, a pair of four-inch stiletto boots, a pack of cigarettes, a tattoo of six numbers on her left forearm, and jaded eyes. Only the accent and the linguistics have changed in the past thirteen years.

The attempt on her life seems to have changed her some. The removal of her position as Prince by the Justicariate has definitely affected her. But the thing that has without a doubt tipped her over the edge is the death of her lover Jack Sebastien.

On May 24, 2013, Archon Jack Sebastien was murdered by known infernalist Elias Beecher. This murder was two years almost to the day as the attempt on her life by the still-unknown assailants that nearly killed her. Katja has since been seen a scant handful of times at her local Court, acting erratically, getting drunk, and on one occasion, weeping openly.

"Hahahahaha. Coterie? I am alone."

"I have no friends. All my friends are dead."

"I have no enemies. All my enemies are dead."

"Over The Love" - Florence + the Machine