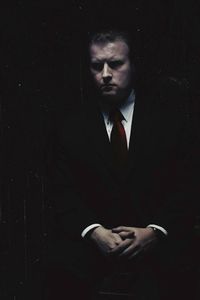 
Concept: "He is a Sociopathic Puppetmaster" -Traci Niklas


Physical description: Valentine dresses in dark, expensive yet unremarkable suits often wearing leather gloves if in a non formal setting. His harsh features shift between cold indifference to scowling in anger or annoyance. It is rare to see him smile outside of the observance of another's suffering, or political blunder. Most agree the curse runs deep in his blood, almost to the point of it being a palpable aura (eerie presence and beacon of the unholy flaws). Despite a host of personality flaws and supernatural creep, Valentine is able to speak with the weight of a legitimate authority and is an experienced politician (Natural Leader merit).

Of recent note:
2/24/2008-5/04/2008 Seneschal to the Warlord Karsh
5/04/2008-8/22/2010 Prince of Columbus Ohio
8/26/2010 Appointed Archon by Tremere Justicar Lotharius to investigate and eliminate infernal threats to the Camarilla.
7/01/2011 Attended the Columbus Conclave in place of Justicar Lotharius.
1/18/2013 Prosecuted during the judicial conclave held over Pinky Wheeler, Lena!, Katja Nothing, and Paul Walker in Milwaukee WI.
3/28/2015 Advocated strongly on behalf of the CoH that they be granted a Justicar during the Baltimore conclave as payment for a Blood boon held by Sebastian Han.
9/21/17 Justicar Lotharius announced he had been executed for employing an Anarch gang to assassinate a Prince.

Valentine has taken several public hard stances on the dangers of technology, specifically the internet. During his time as Prince of Columbus he took extensive measures to cripple the internet and its ability to vector masquerade breaches. During the 2015 conclave he further argued a need to cripple if not disable the internet. 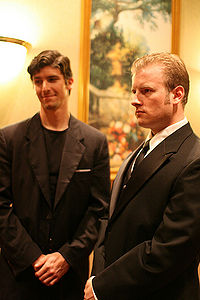 "Call me heavy-handed, but if it isn't Camarilla then it isn't fit to walk the night." -Hugo Valentine