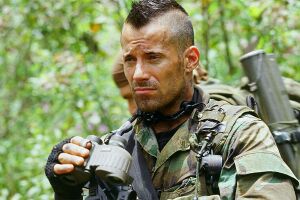 Physical description:
Brown-haired/blue-eyed man standing around 6' tall, Seamus usually tends to dress in nicer clothing with a twist. His Mohawk is his signature trademark.

Claiming to hail from Arkansas, yet carrying an Irish lilt, Seamus arrived in the Mid-Atlantic in March 2012. His first entrance onto the scene was the Second Annual Glitter & Gloom gathering in Baltimore, where he hobnobbed high above his station using his charm and witty banter to gain entry to circles well out of his league. He made many friends that weekend, only to vanish for a few months and resurface once more in September 2012 bearing more charm and wit for another large gathering.

Seamus can often be found in one of two places: 1) near any large group of Brujah, or 2) near any-sized group of attractive women.

None that have yet revealed themselves.