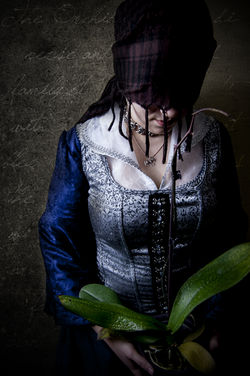 Lena at Midwinter 2013 after her Conclave

Came to Iowa in August 2008 as an Anarch.
In Autumn 2008 was sold to Police Hunters by a group of Anarchs and was saved, in the name of the Masquerade, by members of the Camarilla.
In January 2009 was taken under the accounting of Zio!.
In March 2009 received her Acknowledgement from then Prince John Ragner.
Shortly after gaining her Acknowledgement, she lost her Acknowledgement for refusal to deny Chester Black's praxis, which offended Sara Durward.
Was then taken under Chester Black's Accounting for several months.
Received her second Acknowledgement from then Prince Chester Black of the Twin Cities in Autumn 2009.
Joined Team Fail in 2009.
Gained and lost standing over several years. Served as Deputy Sheriff in Blackhawk County, Keeper of Elysium in Blackhawk County for one night, Harpy of Cedar Rapids, Sheriff of Cedar Rapids during this time.
Declared Praxis of Cedar Rapids, Iowa on the evening of June 3rd, 2011
Shortly after that was Temporary Seneschal in Iowa City for one night.
Worked closely with her clan, the Camarilla, and others during the Year of Fire.
Was Conclaved and removed from Praxis on January 18, 2013
Was made Primogen in Iowa City, IA on May 4th, 2013.
Grew her eyes back on January 16, 2014.
Resigned from Primogen of Iowa City, IA on April 24th, 2014
Named Servire to Archon Ophelia Summer 2014
Named Archon to His Arbiter Eleganciae, Justicar Titus Petronius Niger March 8, 2015

"Let's be serious here Chet, you didn't want a Childe, you wanted a Princess you could lock up in a tower. And last I checked, little birds didn't fly into my haven and braid my fucking hair for me." Lena!'s comments to Chester Black a few months after she left his accounting.


"...Besides, they (Meaning Team Fail) didn't come here for me, they came here for you." - Ted Freeman's last words before he gave his life saving Lena!'s in Twin Cities.

"My earlier question having been answered, I would remind kindred that animals are more dangerous when they are wounded." -Augustine St. Just

"Justicar Streck blinded her...but not with science...I'm guessing with a pencil." -Murray

"I was just a child standing in the desert with a butterfly net and he was the oncoming storm. Nobody can harness a tempest, I understand that now." - Lena

"We always shared that void, the burden of dead loved ones. I always thought you were better than that, stronger than me. Don't look back, keep your eyes on the horizon. I will be with the ghosts, we have nothing for you... Death is unavoidable, life must be fought for." - Part of Pinky Wheeler's last letter to Lena


"I won't say his name, saying it means he'll be remembered. He told me once I'd die alone and forgotten, but I'm still alive and he isn't. So there's that." - Lena