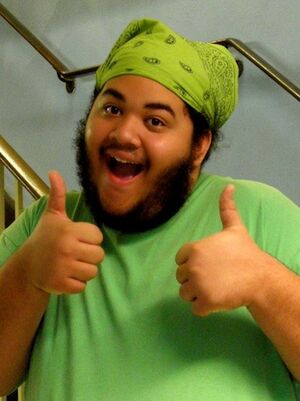 
Real Name: Lan Blackwood is the only one publicly known.

Physical description: He is around 7 and a half feet tall and easily over 500 lbs. He is ethnicity is difficult to place maybe bi racial maybe samoan maybe some sort of indian. He is wearing an all green out fit: pants, scarf, two shirts, bandanna, and appears to be very attractive despite a grievous scar that looks like flames reaching towards the left side of his face. He has curly dark brown hair and deep brown eyes.

Lan is known to be a wild, loud, and genial kindred. After wandering to Carbondale he managed to learn the way of the Camarilla and became acknowledged. He spent many years building fighting the rebellion and making himself a force in Southern Illinois. This culminated in the freeing of Carbonale in June of 09. Has held every position except for Prince on a local level. While very friendly it is known that touching him has had harmful consequences.

Another One Bites the Dust - Queen

Your the Best Around - Joe Esposito

Damn It Feels Good to Be a Gangsta - Them Ghetto Boyz

Your Not in on the Joke - Cobra Starship

"Listen I like you, I really do, but if you don't quit the shit your gonna ride the train to torpor town."

"You look stressed take two blunts to the face and call me in the morning."

"As God as my witness, I thought Lan Blackwood was a Brujah." - Katja Nothing

Rumor has it Lan Blackwood is a famous Snake Killer.

Lan Blackwood is rumored to be an ancient Mayan.

Lan Blackwood is rumored to be a thaumaturge.

It's fun to watch Lan hit things, especially if they're infernal.

He is amazingly lucky at poker.

Lan Blackwood is rumored to be an absolute tool who's success relies heavily on him riding someone else's coattails.