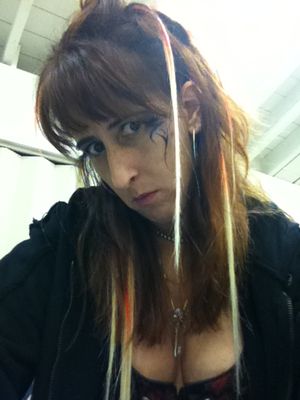 Physical description: Harrow is a lovely pale young woman with deep red hair and eyes so dark they're almost black. There is a slight tilt to her eyes that may suggest some Asian blood in her mixed heritage. She appears to be in her early 20s at most, and has a youthful air about her. There is something penetrating about those eyes; they seem to see far deeper than just the surface. When she speaks, her voice has a low and melodic quality to it (OOC: Enchanting Voice). She tends to wear mostly urban clothing with a tendency toward the Gothic, and sometimes Lolita style.

Not much is known of her living history, though she has frequently shared that she lived in New Orleans right up until Hurricane Katrina chased her to a dive FEMA camp in Texas back in 2005. She is rumored to have lived on the streets there, having willfully fled a very unfortunate series of foster homes.

Harrow arrived in Annapolis, Maryland, with her Sire Rook in the Winter of 2008. She was only a childe under the accounting at the time, having accompanied her sire from the battle front against the Sabbat in New York City. She quickly became known for her straightforward manner and her gift/curse of seeing into the lands of the dead. Almost immediately, she was drawn into local spiritual affairs, notably being trapped in the Shadowlands during the winter of 2009, shortly after her Acknowledgment. She managed to find a way to draw aid to free herself and her companion, Dicky Redman. She served as a Lesser Harpy for her Sire during the Annapolis Conclave, earning distinction and admiration for her work there. Since then, she has become the Primogen of her Clan, serving under 2 Princes in that position,followed by Seneschal to her sire when he claimed Praxis. In 2013, she became Harpy of Annapolis, and continues to serve in that position.

She has become known for her darkly alluring and provocative artwork, rendered in sketches, watercolors, and oils - often employing unique uses of mixed media and texture. She has painted by commission for such figures as Sheniver Dubois, Vincent Velario, Chantel Rousseau, Corvid of Clan Gangrel, Faith Williams, Mama Jewel, and the court of Washington, DC. At Nonclave, 2010, she put on a fashion show for clanmate Michelle Ronet of DC, where all the models were rumored to have been zombies.

She is fierce about fighting the Sabbat with her Sire, who has worked for Warlord Karsh on the battlefront off and on for years.

She doesn't belong to any known coteries - unless a ferocious gaggle of Harpies counts.

"I Want My Innocence Back," by Emelie Autumn
"Don't Fear the Reaper," by the Blue Oyster Cult
"Cymbeline," by Loreena McKennitt
"The World is Growing Loud," by Covenant
"Cities in Dust," by Siouxie and the Banshees
"Graveyard's Full," by the Growlers
"Jesus was a Zombie," by Zombie Girl
"Dear Ophelia," by Abney Park
"Formula," by Chiasm
"When they Come for Me," by Linkin Park
"Bull Fucking Shit," by Sam
"Teeth," by Lady Gaga
"Bad Things," by Jace Everett
"Tea Party," by Kerli
"Further on up the Road," by Johnny Cash
"This is the New Shit," by Marilyn Manson
"Yer Shit's Fucked Up," by Warren Zevon
"Red Right Hand," by Nick Cave and the Bad Seeds
"I Fucking Hate You," by Godsmack
"Afterhours," by Ego Likeness
"Remember Me/Dido's Lament" from Dido and Aeneas
"Fear No Evil," by Collide

"If I got offended every time someone said that my art was creepy, I'd never create anything."

- Whispers say that Harrow is on some kind of weird spiritual quest.
- She's from NYC...at least most recently. She's probably Sabbat.
- She sees dead people. And she likes them more than everyone else.
- It's said she has zombie minions.
- She's suspected by some of being of the antitribu variety.
- She leads a death cult.
- She is a complete and total psychopath.
- Harrow once killed a mage by crushing his nuts.
- Harrow and Rook are under suspicion for Infernalism by the Tremere Justicar's office. [Hugo Valentine] came to Baltimore to investigate them.
- I am Prosymnus.