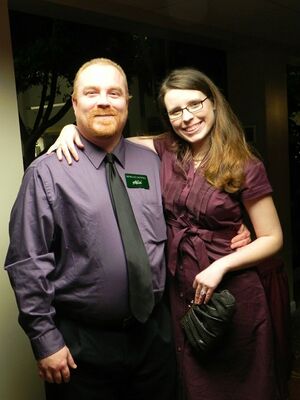 Morgan and Priscilla at 2011 Midwinter Gather

Physical description: Roughly 6 ft tall, with a large-but-well-kept frame. Looks to be of Germanic descent, with neatly trimmed dark hair and goatee, lightly-tanned skin, and a clear complexion. Usually wears business casual, or at least something with a tie.

A "retired" mob boss with still-powerful ties to the family, Howell claimed Praxis of the Twin Cities area after Joseph Hanover stepped down as Prince in August 2010.

Married to Priscilla Howell of Clan Toreador, the wedding took place in November of 2010.

Morgan, as Prince, has blood-hunted three people so far: Horace Mansfield-Rhumer, Anthony Black, and Hajime Kojima. In a deal made with Clan Tremere in January of 2012, Morgan lifted the blood-hunt, and Clan Tremere swore a public oath to uphold the banishment of Hajime from the Twin Cities forever, else they would hunt him down and kill him.

Horace Mansfield-Rhumer was Blood-Hunted by Prince Howell for a laundry list of crimes against the Camarilla some time around 08/20/10. Notably for being a rot and a cancer within the Camarilla. There were a number of other reasons, but they were a part of a hush-hush meeting between Howell and Clan Tremere. Clan Tremere later killed Horace themselves. Right around 11/01/10

Anthony Black was Blood-Hunted by Prince Howell for multiple attempted (and failed) violations of the Tradition of Destruction. He was killed by Morgan's hand 12/03/10, witnessed by members of Clan Brujah. (More detail: Anthony Black was blood-hunted for trying to kill Morgan, Rachel Violet Eiken, and Priscilla Howell. Morgan was all business when it was himself. It was getting escalated when Rachel became targeted. And when Priscilla was attacked... Those that were there would remember the psychotic gleam in Morgan's eye as he loudly and violently blood-hunted Anthony. Through negotiations with Clan Brujah, a member of Clan Brujah (Oliver Freigh) interrogated Anthony Black just before Morgan killed him.)

Baeddan Stone was killed 04/15/11 by Prince Howell for violations of the Traditions of Domain, Progeny, & Accounting,

Sigurd Skraelholm was sentenced to death and killed 10/21/11 by Prince Howell for attempting to murder Sabbat on Elysium.

James Carlson was killed 12/16/11 by Archon Takashi, Sheriff Sylphain Delille, and Harpy Randall, for being a failure as Keeper (He tendered his resignation two weeks after making noise about how much "better" he was than a fellow Toreador), a failure as a sire (Members of Morgan's Domain had brought up how she was being wasted with him.), a failure as a member of the Camarilla (Having an Archon and the Harpy both advocate for his death.), and an endangerment to those around him (words of wisdom from other Primogen.). It is worth noting that Takashi & Randall wanted rights of destruction. While Sylphain did not ask for rights of destruction, he had previously removed his objection to James' death. Rights of destruction were requested and granted.

On Dec. 30th 2011, Prince Howell led many of his Domain residents against the demon Dragal, which had possessed and taken over the body of John Payne. The following individuals did not survive the encounter.
John Payne of Clan Toreador, Seneschal
Alex Randal of Clan Malkavian, Harpy
Katarina of Clan Nosferatu, lesser Harpy
Maeve Cahill of Clan Toreador
Olivia of Clan Brujah
And a Gangrel from La Crosse


On 03/02/12, Morgan Howell explained to his gathered Domain that due to wounds sustained in the fight of Midwinter 2012 against the infernal forces, that he would be unable to physically control the Praxis. As one last bit of honor to his beloved city, Morgan told his Domain that it was a choice for them to say who would be the best ruler/leader. Two individuals stood up. The Domain squared off almost equally in number between Sylphain Delille of Clan Toreador, and Nekoj Kustic of Clan Ventrue. With the very potent bloodied elders of the Domain being called in rather quickly with the typical "911" pages/texts, they sided with Sylphain Delille, having Clan Brujah eldership support & Clan Tremere eldership support. In the meantime, Morgan took Priscilla's arm and left the room of Elysium. As one final note, as to which Morgan supported in this Praxis, Morgan responded: "The City", and left the room.

The question is... What will happen when Morgan feels strong enough to retake the City?

"None shall kill any of the humans."
"Take this as a Law of the Domain. If you believe one of them needs to pass, you will bring your reasons to me Personally. In the event that mistakes happen, you would do well to come to me immediately with news of what happened, how it happened, and why it happened. Punishment will be much less than if I find out about it after the fact."

A former member of the Obsidian Architects; this group was designed to gather together the most mortally influential members of the Domain, and work together in unison for the betterment of the Camarilla locally. This group was eventually disbanded due to various members moving to other Domains.

Letter to the Camarilla regarding Enzo Giovanni

In agreement with Benintendi Giovanni, overseer of Enzo Giovanni, a conclusion has been brought to a matter that has turned into a festering wound for the Twin Cities, and clan Brujah in particular.

The topic of the matter was the murder of Var of clan Brujah, who was Prince of the Twin Cities at the time, executed by Enzo Giovanni.

Mr. Benintendi and I have agreed and moved forward with the understanding that how Clan Giovanni punishes and discplines their own for breaking the Promise is the business of Clan Giovanni. It is not right, nor proper, for a member of the Camarilla to dictate appropriate disciplinary punishments to a member of Clan Giovanni for a transgression of this magnitude.

Mr. Enzo Giovanni has ended the life of a member of the Camarilla Prince. If he were an independent member of any other clan, he would be open season for punitive actions. However, in discussion with Mr. Benintendi, I have come to learn that the murder of a Camarilla Prince is not a killable offense among the Giovanni.

I had originally been asked what sort of task, compensation, or penance could be given to soothe the pain and transgressions of the Promise.

I had thought long and hard on this matter. On the question of what the value of life is worth, not just of a Camarilla Prince, but of any member of the Camarilla. On whether or not penance can ever truly be made given such a situation.

The answer quite simply is, you can't. You can't repay the loss of that life, and the resulting changes and ripples through the Camarilla that such an act created.

This is one of the principle reasons the Promise exists.

That is the punishment bestowed for Enzo's failings. And that is the agreed upon blood-price for his actions in taking the life of a Camarilla Prince and living.

That has been the negotiated deal. Should a member of Clan Giovanni happen to die in the Twin Cities, and a member of the Camarilla happens to be the trigger-man... No matter how much or little that trigger-man is punished, Clan Giovanni will not question nor push for further disciplinary action, nor call for that individuals death. To do such would violate the promise, as agreed upon by Mr. Benintendi Giovanni, duly appointed as representative for this task by Clan Giovanni, and Myself.

I understand that Enzo Giovanni is a disrespectful son of a bitch who deserves to be fucked up the ass with a telephone pole engulfed with flame before being given cement shoes and dropped in the ocean... But Mr. Benintendi Giovanni has been a pleasure to work with, and I'm glad that the two of us could work together to bring this chapter to a close in a manner that is satisfactory to both parties.

I will not breach the Promise to punish another for a breach of the Promise.