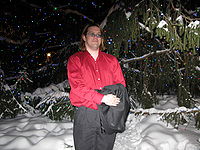 Sylphain at Rice Park in St Paul, enjoying the snow.

Physical description: Standing at a shade under 6', Sylphain is a thin, wiry gentleman with shoulder-length hair. Known to dress in styles ranging from college-artsy to "stereotypical vampire" black-on-red. His blue eyes are usually hidden behind tinted blue glasses.

After his Embrace and Acknowledgment, Sylphain left his Sire (of whom he rarely speaks) and Marseilles and proceeded to wander through Camarilla territories for forty+ years. Primarily through luck, he managed to avoid situations that could be seen as either dangerous or educational.

When the Twin Cities hosted a debate on the nature of the Camarilla and the Traditions in November of 2009, Sylphain, ever the scholar, decided to see what the event was all about. Something about the Domain triggered a wish to settle down, and he has remained there since.

By summer of 2010, Sylphain had gone from unknown nobody to Primogen of Clan Toreador, though he is entirely unsure how this event transpired.

Throughout the majority of his time in the Domain of the Twin Cities, he seems to have been inordinately obsessed with the weather and with Latino gangs. Last winter, the Kindred of the Domain staged an assault, with Sylphain at the head, on a church in a gang-infested area of the Cities, and this obsession has died down.

After being unwillingly involved in the execution of James Carlson, Sylphain ended up with the Accounting of Natasha Taylor due to the efforts of Primogen Howell.

When Morgan Howell stepped down as Prince, Sylphain challenged Nekoj Kustic for Praxis, and won. Four weeks later, in a Praxis fight with Alexei Semago, he was killed.

He doesn't talk about her.

-Chevalier Viewed Through a Half-Cracked Mirror