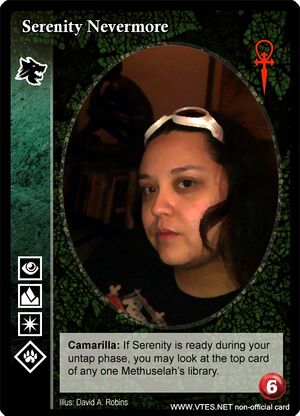 Concept: Literally I saw the picture of the girl in the TT version of the gangrel and wondered what she would be like if it was her first nights as a vampire. A True Neonate. She then evolved into my own modern version of the Storytelling Gangrel.

Physical description: Long dark hair, deep brown eyes, standing about 5'7" curvy stature. Tan- to olive-colored skin. If meeting her at a large event she is usually dressed up, but she's a jeans and flirty shirt girl more often than not.

She claims Clan Gangrel as her only association. Others would say that she and several people are part of a coterie named the Gayggle. In actuality, the Gayggle is composed of members for the Board of Directors of the 10% Society, an organization dedicated to empowering and enhancing the lives of LGBT people.

She claims many people just have sand in their vaginas when they think of her but the following people have just plain pissed her off.

Secretly hates her clan and will turn them in for less than a hershey Bar.

Secretly thinks her clan is all she has left and has kept her rumor mongering to other clans. She has never turned in a gangrel that has done something wrong.

Prince Morgan Howell hates her and is doing his best to screw her over.

Betrayed the Camarilla by giving information to the Sabbat. She isn't allowed in several domains for this reason.

Was investigated for betraying the Camarilla to the Sabbat. She was released sans punishment by Archon Takashi.

Violated Elysium in the Twin Cities on multiple occasions.