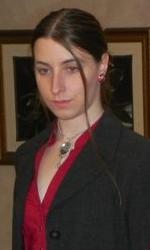 Rowan at the 2011 Midwinter gathering in Milwaukee, WI.

Physical description: Rowan is a shorter, athletically-built girl of Caucasian descent; easily mistaken for a mortal, she has grey eyes and longish brown hair that she almost always wears in a bun. She dresses in student clothing or business casual when on her own, but wears business formal and 'dressy' stuff at public events and Kindred events. She speaks in a British (Recieved Pronounciation/Estuary English) accent.

Rowan arrived in the Twin Cities mid-August; since her initial encounter with the Camarilla, she has been under the Accounting and/or protection of several Kindred (about a dozen, by her own count) across two domains, transferred from one to another by convenience, misfortune, or necessity. Her Accounting was initiated by Primogen Thomas Charles Montgomery of Clan Ventrue, and is currently held by his Childe Rachel Violet Eiken, Harpy of the Twin Cities.

She claims to have been born in England and have a degree in modern history; judging by her actions in public, it would be safe to assume she's telling the truth. She has been known to do such things as mumble poetry, correct other peoples' grammar, debate the Latin root-words of English derivatives, and discuss British political practices with unsuspecting bystanders. Recently, though, she has taken to trailing off in her speech and not speaking at all- something that has come to annoy several court members who take this as a sign of extreme shyness- not a good trait for a proper Kindred, in the eyes of many. Especially when she starts getting shaky or jittery during tense conversation; of course, Aleister Blackwell seems to think it's cute...

Rowan recently attended the Midwinter gather in Milwaukee, but seemed to have social difficulties throughout the gather, including several exchanges of company between Kindred who knew her. When asked, she has stated that she wasn't prepared for how many Kindred were in attendance. After returning, she seems to have grown more sensitive to visions (mostly those shared by her 'cousins' and Fiona "Fifi!" LeStrange) while needing more time to recover from them than anyone else. She has also been seen in a couple neighboring Domains, notably Winona and Cedar Falls, Iowa; she has been in the company of other Kindred from the Twin Cities while visiting, but who knows the reasons she travelled to those area...

[As a player, I like to put up plenty of stuff so that other people might come across something they can use ;) ]

Side 2: The Price of Sanity