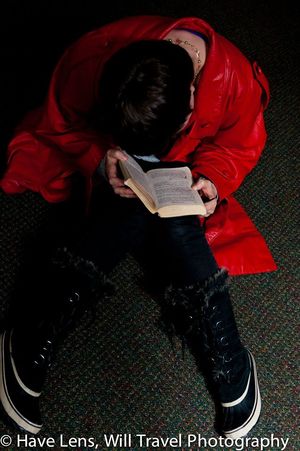 Physical description: Luni is 5'2" with shaggy dark hair and a thin waif-like appearance. She is easily mistaken for human (Blush) and has green eyes. She is usually wearing a large red coat or shawl, and carrying a book.

Luni appeared one day in the Domain of Twin Cities claiming to be a wanderer. She stayed there for almost a year before moving to the domain of Black Hawk County. She often travels without any real pattern or consistency to nearby domains.

Shortly after her arrival in the Twin Cities it was found out by Zio! that she is a seer. For her use of this ability to help the domain he awarded her the status of Wise for which she is named.

She moved to Black Hawk County and became Harpy there under Prince Richardson. Shortly before Richardson lost his praxis she took the post of Malkavian Primogen.

She is very close with Lady Black and Luni can be seen in Lady Black's entourage at events they both attend.

She came to Prince Murray x in the summer of 2012 and asked him to grant Acknowledgement for Colin Laney, a Malkavian who had apparently been under her Accounting for some time.

Around 2013 Luni started to spend more time in the domain of Milwaukee, eventually moving there permanently in 2014 under Prince Gary Kowaleski. After Pagan took over the praxis of Milwaukee, she became Seneschal, and left that position in 2017.

She returned to the Domain of Black Hawk County under Prince Helena Russo where she held no position.

More recently, 2021, she has relocated to Annapolis, where she serves as a Primogen under Prince Rook .

"We don't talk about Cotton Mather."


"Either this Malkavian has sunk deeper into madness than most of her ilk, or she is operating on a separate layer of the Jyhad than most. It both amuses and worries me that I am not certain which." -Augustine St. Just

"If you can’t make jokes at the expense of a world-eating monstrosity you’re just gonna collapse into a depression that ends with you."