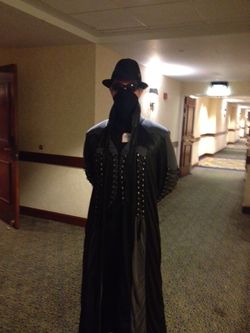 "What I was before is irrelevant, what I am now even more so. What good are names and histories to we whom rewrite both to keep ourselves hidden from the world? All you need know is that my sire was a holy man and a crusader. He tired of the never ending battle against evil and felt that if perhaps he understood his enemy better he might find the key to their end. So he embraced me and I did not disappoint."

"All sentient beings lie, for all of them have something they wish to hide. Take a man and strip him of all that he owns, kill all that matters to him, and deny him a future in this or any other world. When you have torn away all that surrounds and left him utterly alone in his very last moment, then and only then, will he display honesty." -Augustine on making friends

"Do not fear God, little one, for his mercy is infinite and extends to all but my cursed kind. My mercy, however, atrophied long ago. Confess your sins and I shall usher you into His loving hand swiftly, but continue to lie to me and you will spend an eternity with my full attention. You will meet Him penitent or not at all." -Augustine on religion

"I think the next time I need to punish someone in my domain I'm just going to leave them alone in a room with Augustine for 30 minutes." -Prince Murray x


"Look at Augustine. He has a half face you can trust!" -Prince Murray x

"Whose side is Augustine on? I think it's pretty obvious, really. He's on Augustine's side. You can count on him to do the thing that benefits him the most. The trick is in figuring out what that is." -Daniel "Mac" McDonald