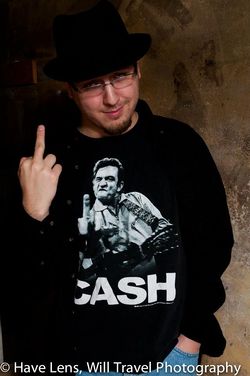 Born and raised in the suburbs of Chicago. Dropped out of high school to tour with his band. Eventually ended up singing backup for JR Lake and was embraced at the end of the tour. Left JR a while later to start his own band and spent the next few years traveling around the country with Illusions of Grandeur. Ended up in Cedar Rapids to make fun of his sire who had just been made Harpy.

Settled down in Cedar Rapids to help JR work through his domain issues, and then to help keep the ranch up when JR was taken away and eventually killed. Cricket got fed up with the political climate over the next year and eventually gave up his acknowledgement. The band broke up a while later in the storm following this choice and most of the members left town. Cricket made his peace with the prince and rejoined the Camarilla shortly after.

Shortly after, Saffron Colocott-Lake and Melinda Lake were killed and Cricket’s mindset began to change. At the following Midwinter, he pushed himself to create a proper memorial and his performance manifested the forms of all those he had lost. From this point, Cricket began adopting the philosophy that he would live for those who had died, and hold those responsible for their deaths to the same standard, rather than seeking their deaths.

In the following year, Cricket became more involved in local and clan politics. He was involved in both a failed and successful praxis attempt. He held the positions of Keeper and Seneschal. He was highly involved in removing a group of troublesome Setites from the state. He began making connections in the Twin Cities amongst his clan. This trend continued for a few years until he became Prince.

He lead the city as prince for several months before he abdicated his praxis to Lena!, stating that he did not feel he was capable of handling the job at the time.

Since then, he has been touring around the Midwest and stopping by domains to visit when the mood strikes him. He recently settled down in the Black Hawk County domain where he is hoping to set up shop.

No one in particular

"I was not aware that the Camarilla had a sense of humor. Then Crickett Marriot was Acknowledged. Apparently most do not understand the joke." -Augustine St. Just