She that Burns As the Sun (Sunny) 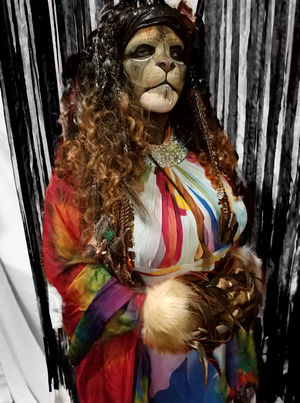 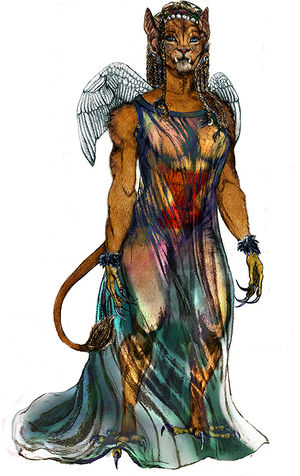 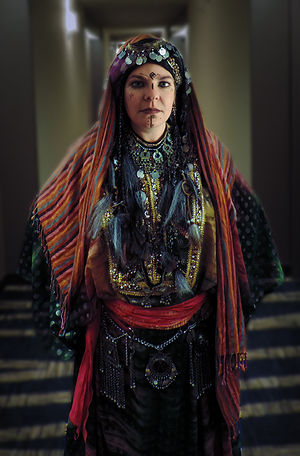 Sunny with mask (as portrayed by player)

Alias(es):
Sunny, She that Burns as the Sun
Real Name:
Not known
Apparent Age:
With Mask: 16
Without Mask: Hard to tell
Concept:
Gangrel Elder
Physical description:
With Mask: Spanish/Morrocan (Berber)
Without Mask:


Sunny's frame is quite short, maybe five foot even, and muscular. Her fingers are eagle's talons, her feet completely split like a bird: all fingers and toes ending in sharp hooked talons. Her legs are part lion/part eagle, with the digitigrade stance of a bird, walking on her toes. Bat ears sweep up on the sides of her head, and white feathered wings lay flat to her back. The feathers of the wings look odd.. almost translucent like a dragon fly's wings.. but in feather form. A lion's tail swishes behind her, and her visible skin is of a lion's, more fur than flesh, the markings of the lion are prominent on her face.
Beneath the fur one can see the hint of facial tattoos, which are slightly blurred by the fur but still visible enough. Beneath her clothing (if her stomach is ever visible) she has a bright red hourglass in the fur of her stomach. She has a long mane braided with various trinkets, the hair is also more like fur; course and thick patches mixed with the curls of human hair still present. It is hard to tell what animal her hair may be representative of; her mane is shot with black, silver, brown, and red browns.
The only human feature upon her are bright blue eyes. She gives off the feeling of an entirely inhumane alien predator. When she speaks, her face splits from ear to ear, and the membrane of a snake's mouth is visible, even though her gaping maw is that of a lion's. Nasty teeth protrude from her mouth, and when she speaks, part of her accent could be attributed to having to talk around her large fangs. The closest thing she could be described as is a chimera.
Sunny is not humane, and though she is able to interact well with others, she is more beast than a person.

Came to the West Coast around 2006, she lived as an Independent for several years until 2014, when she was declared acknowledged by former Prince Braddock. She is known to assist multiple domains with a wide range of problems.

Many. You should be concerned.

They know who they are

Publicly known: Nim
Rumored to have a LOT more

An Elder waking in Modern Nights to find their entire world has come undone. They don't know who of their allies, clan, or friends are alive. They do not have the power of their peers who stayed awake, nor the foolish hope of youth, and can see how far the mighty have fallen. They know the lost stories and know equally that the young do not care about the past. Their wisdom is taken for granted, and they rely on the new Kindred that surrounds them. They discover the horror of what has become of their family line. They must learn to fit in, and will always feel like an alien outsider in a new, crowded and noisy world. Everything must be relearned, and only time can tell if they are up for the challenge.

Various and ever changing

"Well, for many reasons, we cannot blow up the Police Department, not the least of which being that is exactly how you get hunters, which love to visit this domain so regularly you would think we were an amusement park for the Faithful" 04/25/2020 in her Domain of Berkeley, CA