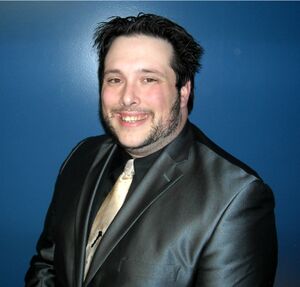 Physical description:Gerard is tall with dark fashionable hair, dark eyes, a well groomed beard and manicured nails. He walks with good posture and speaks in a friendly tone.

In his home domain he is most often seen in a shiny modern suit, usually silver sharkskin over black with a fashionable tie.

Other times he is dressed in a comfortable looking sweater over a shirt and bowtie (or regular tie) with comfortable slacks.

He always has a purple smartphone in his hand for most of the evening.

Gerard had been known to dress to the holiday season at hand. For example, he was seen around Christmas with a green shirt and red bowtie under a black knit sweater.

In recent nights, Gerard has traded the sharkskin for a more muted, tailored grey suit.

* Acknowledged (by Theodore D'Aubigne, Prince of Monaco)
* Well-Connected (Awarded September 9th, 2011 for services to the domain.)
* Famous (Awarded December 2011 for Philanthropic pursuits to better the Domain.)
* Resourceful (Awarded May 2012 for Masquerade control.)
* Wise (Awarded September 2012 for his knowledge of Kindred politics and etiquette.)
* Esteemed (Awarded November 2012 for his grace and decorum working with Hartford for a successful Northeast Event.)
* Exalted (as Prince)
* Famous (as Prince)
* Well Known (as Prince)
* Childe of the Prince of San Francisco (Prestigious Sire)

Formerly:
* Revered (Relinquished at the 2012 Northeast Event to accept the Esteemed name from Prince Pyotrevna)

Gerard claims to have spent his living years as a world traveller, having been born in Hong Kong and spending his early childhood in the Carribean. He keeps his past to himself other than random anecdotes about European and Asian countries. One thing that is known, In May of 2011 Gerard moved to Westchester County, NY and looked to establish business, mortal and kindred, in Greater New York. He has since been injected into the Court structure as Keeper of Elysium and is already one of the more respected and recognizable members of the domain.

Gerard has taken a recent interest in adding a more established nightlife to the Ulster County area. Also, his fasion sense has been duplicated by the Prince of Greater New York who now also wears a shiny gray sharkskin suit and a black shirt.

In late 2011, Gerard's name exploded as a new business mogul in the New York area. His development projects to bring prosperity to the City of White Plains has been touted on some National News networks (Fame x4) and his name is household in the state of New York. His subsidiary company, The Tomorrow CompaNY, is solely focused on bettering the Greater New York area, promoting tourism, and improving like for the citizens.

In early 2012, Gerard was seen travelling to Hartford, CT to meet with several area Ventrue. As often happens in Hartford when Ventrue meet, rumors began to circulate that Prince Anya's praxis may be in jeopardy. No power play was made that evening, however, and the Ventrue seemed cordial and willing to help with any city matters.

In March 2012, Saint Clair was named the successor as Ventrue Primogen. He continues to serve as Keeper of Elysium for the present.

On the evening of September 14th, 2012, Gerard Saint Clair announced that Edmond Dantes had adopted pursuits that the man obviously felt were greater than the Domain. Saint Clair seized Praxis uncontested. He publicly stated he did not begrudge Dantes for his abandonment, since the Nosferatu as a founding clan of the Camarilla helped build the foundation of the Sect, Dantes did his part in building the foundation of the domain.

Gerard brought a few friends with him to Westchester. Most notably a Brujah named Gabriel Phillip Lono, a Toreador named Julietta Sarantos, and a Malkavian named Lillian Kinney. He refers to them all as work associates at his firm, Global Solution Consultants, and they do spend a good amount of time at court interacting outside of their circle. As to whether or not this group is a coterie... that's for others to decide. 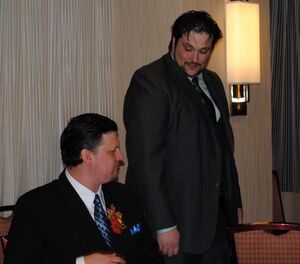 "You obviously have your sire's way with words. I commend you." - Kate Davidson

"I'm tired of those people making baseless accusations about me. They've never met me. They don't know me. If they felt how I was feeling right now, they would struggle not to simply fall to ash. And that's not a commentary on their weakness, but on the strength of my pain."

"I'm going to sit in this chair slightly behind you and to the left. Because that's funny." - to Virgil Deems at a Prince's meeting

Gerard: "Where do you live now?"
Morgan: "Kingston"
Gerard: "Then why don't you head back there?"
- Gerard's response to the local Setite looking to publicly grab more land within an hour of a praxis

"...I do not begrudge Edmond Dantes for leaving the domain now. Like the Nosferatu, a founding clan of the Camarilla, Edmond Dantes laid the foundation for a greater Westchester County, and now it is time for us to build up to a great Camarillan domain. The Ventrue are meant for such things..." - Gerard during his claim of praxis

"Finding the right person for a job is what I do, your Grace." - Gerard to his Prince about finding a suitable Harpy

"For the first time in a while, Dr. Reid, you're not the scariest Tremere in the room." - Saint Clair during a visit from Selene Lazarion

"That depends who wins the auction." - in response to the question 'Is the beatdown from Elias Beecher for the winner or the winner's choice?'

"How come no one ever asks [me] the most beautiful thing I've done with money?"