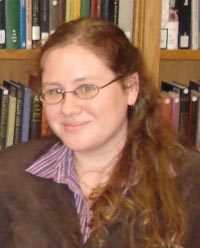 Physical description: Claire's of average height, with brown hair and glasses. While she dresses in skirts and jackets, she tends more towards the academic's tweed than the businesswoman's black pinstripe.

Claire was embraced in San Francisco and completed her accounting under her grandsire, Sir Augustus FitzGerald. She arrived in Baltimore in April, 2010 and has served in the positions of whip and primogen to her clan, as well as the Lesser Harpy. Claire seems to be a bit of a language nerd. She served as Ventrue Primogen and Lesser Harpy to Victoria DeLaNoche for just over a year before assuming the position of Harpy. Claire was known for her skill coordinating influences both within and outside her clan. In Spring of 2011, she was abducted by a Sabbat Bishop for a short while, and afterwards left the domain of Baltimore for several weeks. She returned the same night he was captured and destroyed.

She met her final death November 20, 2011, presumably at the hand of Enterri Giovanni.

The Patrician and Edwin Jarvis, with bits of Evelyn Carnahan mixed in

None, at the moment

"You give me the option of a death tonight, with honor, or some later death as a traitor. I'd rather die tonight."