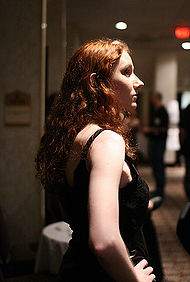 Physical Description: Jennica is a thin, pale woman of average height and formal bearing. Her features are fine-carved, almost sharp, appearing more ethereal than seductive. (Gorgeous x5, Magnetic x3) She has dark blue eyes and long, curly red hair, left loose around her shoulders. Her voice is even and low, seeming to always hold a few words in reserve. At court, she tends toward semi-formal clothing in dark colors, be it a well-tailored suit or an understated cocktail dress, always with heels. Outside of court, especially when travelling, she prefers dark, simple, utilitarian clothing. 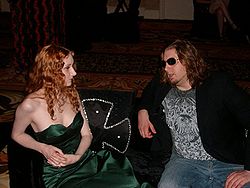 Very little is known of Jennica's past, which she prefers not to discuss; bits and pieces are best gl* eaned from those who have known her a while.

Ousted from praxis by an ambush later that year, Jennica roamed the continent for a while--then disappeared into torpor. Awakening around 2018, she traveled frequently between Georgia domains--fighting alongside friends, losing her humanity, and beginning the long struggle to regain it.

Beginning in late 2020, she orchestrated a series of popular soirees, establishing a reputation as a masterful socialite, and moved her formal residence to St. Augustine, Florida. Still travelling frequently, her attitude seems changed--driven less by wanderlust than commitment to an untold plan.