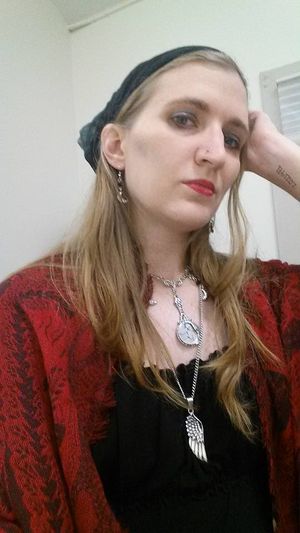 Physical description: Not an intimidating woman by any means, she's of average height and a slight build. She's a pretty girl with dark wavy hair and hazel eyes. Her skin, although paled from the embrace, is of a medium complexion. It's sometimes hidden, but there is a tell-tale number tattooed on the inside of her left wrist that gives away her scarred past. To those familiar with the culture, her features suggest she is Rom.

She arrived in Philadelphia in late 2005. She's served as Primogen, Sheriff, Keeper, and as Harpy

Prior to Kindred life, it's fairly well known that she survived a term in one of the many Nazi camps of the Holocaust. It's fairly well known that she lost her sister during that time as well. In 2012, she moved to Annapolis and in the spring of 2014 she was named Seneschal after her predecessor Hannah Martin was made an Archon. Since the boost to her position, she's been very active in the Camarilla social scene, being invited to and attending all sorts of parties with other noteworthy Kindred in attendance. In the early fall of 2017, she stepped down from her position without much public statement as to why, though there seems to have been no "falling out" between herself and the Prince.

Rumor has it she's neck deep in some society or another, but accounts differ as to which one.

In the summer of 2019, she was called to service as an Archon to the Toreador Justicar. She assumed the alias Acantha.

She calls him Hugh or Henry and doesn't seem to like him very much.

"I want to pet him..." Whispered while staring towards a Gangrel in otter form.

"Don't use a straightjacket on him. That's cultural appropriation." -Izzy to Rook

She's gone by many names in the past and has been known to have other personalities, but claims they're all one again.
She once spent five to six months in Wales, as the subject of a Justicarial investigation.
She is a prophet, having a great deal of talent with reading tarot.
She was having an affair with Ion Jones before his death and alleged attempt to defect to the Sabbat.
She is very protective of Rom (gypsies, though she takes great offense to the term) and Malkavians.
She has a broodmate in addition to Jesse, or created by Jesse, depending on which rumour is true (if either).
Not actually a Malkavian--at least anymore. Who knows how that could have happened?
She threatened to kill Elisabeth Schroeder if she went by the nickname 'Izzy'
Shortly before she stepped down as Seneschal, Izzy had a tendency to ignore her Domain duties in favor of spending time with other Rom
Izzy has referenced being engaged or married in several conversations as of late
I am Prosymnus.