Real Name: You have to ask him, if you dare

Physical description: Alexei stands 5’10” with an average build. Appears to be of European descent and has average features with brown hair and a pale complexion. The one distinguishing characteristic is a scar that runs down his right cheek. He claims to be from St. Petersburg but his English is flawless. Although he has been known to speak Russian equally as well. In addition, all that come near Alexei soon realize that he is a predator amongst the sheep.

Alexei is usually dressed in dark, military style clothing, better to hide the blood and the brain matter and is always heavily armed. 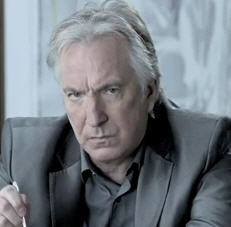 Represents Alexei's glare, does not represent what he looks like

Little is known about Alexei before his arrival in the domain of the Twin Cities in November of 2010. His cold demeanor and curt answers have left his past a mystery. What people know about Alexei is that he is a member of Clan Brujah who came from St. Petersburg, Russia. Alexei has also freely admitted to working in the underworld as hit-man.

Since his arrival Alexei has made a name for himself as a brutal individual, becoming Scourge for the domain after only a couple of months of residence. It is rare for a gathering to go by without Alexei threatening to shoot someone, usually with the backing of the Prince. This constant threat of violence has made Alexei a solitary figure in the court that few wish to approach. Only Morgan Wynn Howell, Nekoj Kustic, and Baeddan Stone seem to freely speak with Alexei. The rest of the court keeps a respectful distance, especially Clan Toreador who seems to have become the target of Alexei’s more violent comments as of late.

More recently Alexei was seen getting into an argument with Prince Saif Al Din of La Crosse at a gathering. This nearly wordless argument lead to Prince Saif Al Din demanding that Alexei shoot him, which was backed by a command from Prince Morgan Wynn Howell. After shooting Prince Saif Al Din four times Alexei stood silently and allowed himself to be battered three times by Saif Al Din (who was using a chainsaw at the time) with only one phrase passing between the two of them. The argument ended, the gathering went on as if nothing happened, just another night in the Twin Cities.

After a "come to Jesus" moment from Morgan Wynn Howell, where Morgan admitted he was horribly weakened by the events of the 2012 Midwinter gathering, a Praxis struggle arose. Alexei backed the play of Nekoj Kustic, who was opposed by Sylphain Delille. After the elders of the domain backed Sylphain and Nekoj dropped his claim Alexei walked out of Elysium.

Several days after Sylphain Delille claimed Praxis of the Twin Cities Alexei made a declaration of his own. Alexei claimed an area to the west of what was traditionally the domain of the Twin Cities and south of St. Cloud as his own domain, known as Little St. Petersburg. He claimed this area stating that it was now the property of the Kandiyohi Bratva and that he was the Boss of this Bratva. While most of Little St. Petersburg was outside of the area claimed by Sylphain a small portion fell into contested territory. Tensions rose in the area as Sylphain told his domain to capture Alexei for his transgressions while Alexei stood defiant.

Eventually Sylphain summoned Alexei to an abandoned farmstead in the contested area and attempted to torpor him with the aid of Ari Renard (Sheriff at the time), Charlie, D(Keeper of Elysium), Razi Massoud, Syprus Herring (Harpy), and Dr. Herbert Kaufman. Alexei was followed to the abandoned farmstead by members of his bratva and a fight ensued. When the first round of fighting stopped Sylphain lay in torpor with Alexei standing unharmed. It was also revealed that one of the individuals that had accompanied Alexei was Nekoj Kustic (Seneschal at the time), though he did not involve himself in the fight. In a strange act of diplomacy Alexei allowed Sylphain to be awoken from torpor to negotiate the surrendering of the contested territory. Unwilling to bend to demands made Sylphain made a gesture and Herbert Kaufman attacked Alexei from behind. As the fight started again Alexei uttered the words Praxis and put Sylphain and Ari into torpor while driving Dr. Kaufman off. Once again Alexei's inhuman nature reasserted itself and he executed both Sylphain and Ari.

Since taking Praxis Alexei has shown himself to be a brutal Prince and instituded a very strict formal court procedure. For actions taken during the fight Dr. Herbert Kaufman was staked and displayed in an Elysium as punishment until a raid by the FBI forced Alexei to order his death to protect the Masquerade. For these actions Alexei stripped himself of his Respected name for no Kindred that orders the death of anyone on Elysium can not be respected. Alexei enslaved Simon Williamsen to an air spirit as punishment for actions taken by Hajime Kojima that caused this same air spirit to attacked the domain of the Twin Cities trying to get compensation for a deal brokered and broken by Hajime. For defying an order Charlie Walker was demoted from Primogen to Scourge as punishment.

In July of 2012 there was a change in the court structure. Nejok Kustic, who was Seneschal at the time and friend of Alexei, was revealed to have committed Diablerie 3 times on members of the Sabbat without the Rights of Amaranth. For these crimes Alexei destroyed Nejok and made James Carter his Seneschal. It was shortly afterwards that Alexei announced he had Embraced 5 childer and introduced the Domain to one of them, John Cutter. The other childer have not been seen yet as he does not feel they are ready to attend gathering. Alexei has also come to an agreement with Clan Giovanni and they are once more allowed to attend gatherings.

In September of 2012 Alexei executed long term resident of the Domain Anton Chernobog. Alexei revealed that Anton had been using magic to blood bond one of his Primogen, Mark of Clan Gangrel. Asking the opinion of his Primogen Council in open court the majority agreed that the only punishment that was suitable was Final Death. Anton met his Final Death in court after he was brought staked into court by Clan Tremere.

Those Slain By His Hand

Alexei has made only brief mentions about his sire.

John Cutter
Alexei announced that he embraced 4 other childer recently but has not brought them to gathering yet.

Alexei only mentions those that didn't survive the Accounting. If he has living broodmates he does not talk about them.

The Professional
Deathwish
The Operative from Serenity