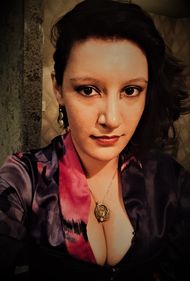 Showcasing the color of the moment

Physical description: Rather tall with a stern posture when she is in work mode. When she is at play, her persona seems to fill the space she is in entirely. Long dark brown hair with olive toned skin, and rarely seen without Lucas Grunwald's rose locket around her neck. Her more revealing ensembles show a long faded scar on her shoulder blade. After a multi-month stint in the astral planes she has returned with an eerie presence centered around the broken spectrum of colors that are constantly swirling in her eyes.

Dignified as a Dignitary of the Camarilla

Trusted as Seneschal of Atlanta, Georgia

Esteemed as Seneschal of Atlanta, Georgia

Cherished as Seneschal of Atlanta, Georgia

Once she was rising star in Germany's culinary world. Her passion caught the attention of her sire upon first meeting, or the assault on her sous-chef during competition may have had something to do with it. Whatever the rationale, her 'lie, steal, cheat, kill or die' attitude for perfecting her art led her into the arms of Clan Toreador.

The tall rose devoured every lesson her sire had to offer, even finding herself a mentor in Lucas Grunwald in combat tactics. It has been suggested on more than one occasion that she inherited both his disdain for stupidity. After his death Petra kept her name hyphenated in his memory. With the passing of her broodmate Aegis Cole soon after, she was thrown into a deeper state of mourning.

After reeling from enough tragedy Petra began considering a change of scenery for herself. The wandering rose made quite a splash in the domain of her broodmate Zackary Cole while visiting with her family in 2013. She was even spotted out in public dancing with Prince Luther Rommell.

Upon the embrace of her cherished ghoul, Dr. Ion, by Clan Lasombra, she was absolutely crushed. The mere sight of him is reported to cause her pain. 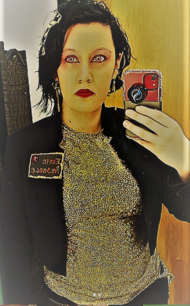 It has been a long night, tread carefully

After a trip to Columbus, Ohio and an extended conversation with their Keeper, she was struck with inspiration, sending the domain 7 Yoshino Cherry Trees as a token of affection. She would return again a year later to check up on her new found friends.

Initially she served in the Primogen seat of Atlanta, Georgia, a reputedly cursed spot for Toreador after David Blanchett vacated the position, as well as existence. Despite this, she was seen in numerous domains with an easy going smile, though she had been seen on the arm of a certain Columbus Gangrel on more than one occasion.

The wandering rose then made her next move, this time as Seneschal of Atlanta, Georgia. As excited as some were for this promotion, Grunwald-Cole herself seemed to be growing in ire for the boldly stupid.

Her romance with Irish, has met with a tragic end after his assassination. She has not forgotten nor has she forgiven his killers.

As wild and bold as Petra has been she met with a very sudden and unexplained silence for roughly six months between 2019 and early 2020.

After her sudden disappearance in mid 2019 the Seneschal of Atlanta has erupted from the confines of the astral plane in early 2020. An eerie spectrum of broken colors swirls endlessly in her eyes and the coquettish albeit charming rose is now more abrupt and bitey than ever after dropping her hyphenated name. Any smiles she gives these nights often do not reach her eyes as she seems largely distracted by an unseen presence whenever she is out and about. She now refuses to go by anything other than Petra Grunwald. Tread carefully.

Adam Cole - The loud one

Hunter Cole - The sweet one

Hadley Grace - The good one

Give Me A Reason To Love You - The Oriones

Up All Night - Best Coast

"Because knowledge is power, darling, and sometimes I need more than lace and high heels to feel powerful."

"The bond broke. It hurts."

"You cannot hide from me."

"As the most boring person at the table, it is now your responsibility to give us a topic of interest. See this way you can sit back quietly while the rest of us talk. Brilliant, yes?"

"Better to be a bitch than a weak Prince's cunt."

'Simply be flawless as usual, and you have nothing to worry about. If you get vexed? Well, then outshine your vexer, and get even later.'

"I am robbed of your wit I enjoyed in Ravenna."

"Here, I will teach you the German swears!"

Elder: Now you speak English. Other than being Nazi? Non.

Petra: Nein, I am not part of a defunct class of bigots. I have a question for you, how do you say, 'I surrender' in French? Or do you say it in German?

"-if you want what you cannot have then you will always have disappointment. Be like me, want what you have, then make others want you. Denial of others is sweeter than denial of self."

"Next time you wear the pants and pay for things, I already pay for limo!"

"I find better, that more interest comes from seeing, and listening, than person prattling aimlessly."

"The flower is bruised, but still strong and blooming." - Anonymous