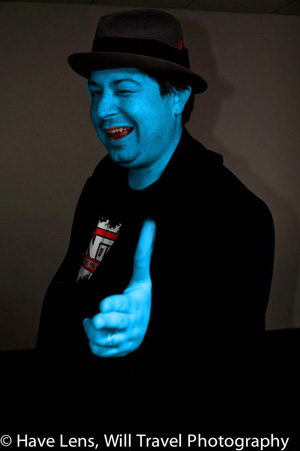 Apparent Age: Who could tell?

Concept: The guy who meets James Bond, gives him information and then goes away, to live and not get his testicles electrocuted

Physical description: With his ever present "Nos" t-shirt and various HIDEOUS button up shirts, Murray almost always wears a generic Mask. Unmasked, he looks not unlike an Atog from Magic the Gathering, only with huge tusks and he is electric blue. He LOVES showing people who ask. He smells, at all times, like Vap-O-Rub and menthol.

Used to be seen with a lot with members of Illusions of Grandeur but not an official member.

Other childer are rumored but have not been seen. 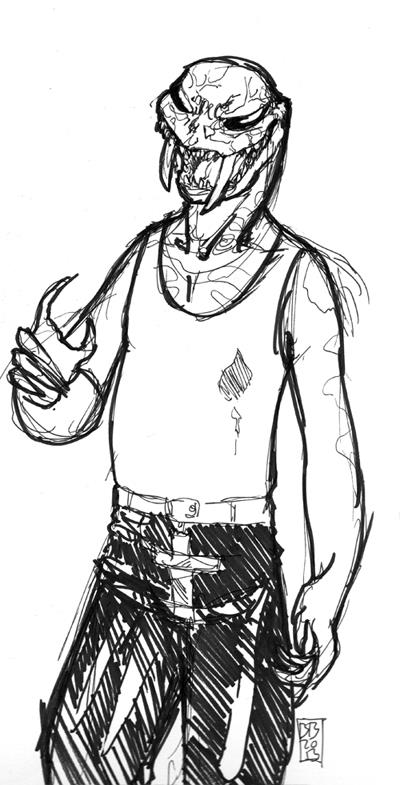 "I killed a Setite last week that sold his soul for Majesty...I'm gonna let that set in." November, 2011

"Oh man, it must suck having only two rooms in your haven, Mr. Ventrue. Did I mention that I LIVE IN A @#$%ING SEWER?"

"How much for your face? It'll grow back." -to many, many Toreador

"Murray is the face of Clan Nosferatu in Iowa. He's the tusks, too." -Eddie Lincoln

"So what did we learn tonight? We learned that Clan Toreador...is the enemy..." -to his Domain

"Fuck pretty." -to every Prince in the Camarilla

"I have no place for Toreador. That's why my Toreador Primogen is a Daughter of Cacophony." -to whoever will listen

"He has turned trolling into a political sport." - Fifi!

Has a collection of Kindred faces that he has bought and/or procured in his haven.

Has two dogs, both named "Warren".

Has crazy sex with his girlfriend Louise Hopkins, involving things like barbed wire sex swings and other crazy (and dangerous) things. In fact, it's thought that her absences from gatherings may be due to him tying her up and forgetting about her.

His sire still watches over him from time to time...

Terrified Prince Tao the first gathering after she took Praxis. He showed up and she thought he was going to make her a Marquis...

Is desperately looking for someone but won't say who.

Has his own mascot, it is a Turkey named "Gobbles" who is not only a cop killer but was also temporarily his Seneschal.

Has punished neonates on two occasions by nailing them to walls so they would not squirm while he screamed at them.

Often accused of trolling, which he wields like a Toreador wields their art forms.

Came to Iowa in 2007 to clean up the messes left by his Sire, Eel and Marv Blackwater

Presented at the Toreador Roast of Katja Nothing in 2013 and got as many shocked stares as he got laughs as he told sellable information about people in the room with punchlines attached including how Conclaves over Katja Nothing, Paul Walker and Pinky Wheeler needed to happen. That Conclave was conducted a half hour later.

He is a dead man.