Fernando, in a reunion

Physical description: Fernando is tall (182 cm), has greenish-brown eyes, and body with defined muscles. Fernando has the Merits: “Enchanting Voice”, “Baby Face”, “Blush of Health”, “Inoffensive to Animals”, and “Sanctity” 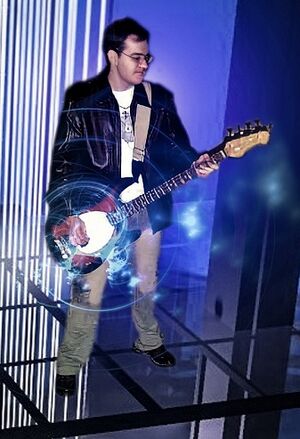 Fernando, in one of his presentations.

Fernando loves music above all arts. He plays bass, guitar, piano and drums.

Yes, he is no longer famous for being a terrible dancer.

After his Embrace, he dwelt for a while longer with his Sire. Afterwards, she decided to travel around the world, to see the places he already knew, now from the perspective of a citizen of the Camarilla. He traveled until, in 2003, his Sire called him back to help his city, Brasília/DF, face a threat.

And in these three Cities (Brasília, Pirenópolis and Piriápolis/Uruguay), Fernando was always known for being firm with the Traditions, for defending the Camarilla with all his might, and punishing anyone who disrespected the Traditions or the Camarilla, even if they were other Toreador.

And he is *always* very discreet. Too much, for a Toreador...

Allies (or people that Fernando would do his best to help)

Many members of his clan, that Fernando sees as his family

Some for sure. But he hasn't cared much about them lately.