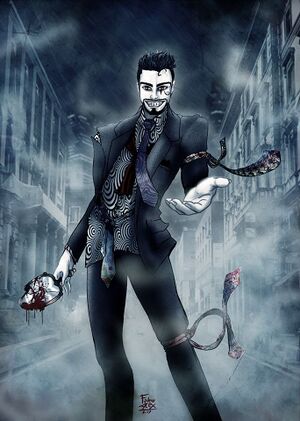 Physical Description: Average height and slim. He wears a goatee, and his skin is very white, like a masquerade painted in his face's skin, with red lips, brown eyes, arched eyebrows and a widow peak. Despite that, his demeanour is friendly and warm. He has a tattoo of an Horus Eye's in his left eye. Uses expensive clothes, generally fine suits, covering all his body, but when it was uncovered, it could be saw it was tattooed with arcane symbols. And many many wondrous ties, on his neck, hanging by his arms, in his pockets, in God knows where else. There's never such a thing as "too many ties".

Born in Italy, he was the son of a wealthy textile merchant. Despite his upbringing, he participated in the French Revolution and was Embraced by that time around 1790. He was released in the night by 1810, and disappeared for many decades until resurfacing at Milan, in time to hear about Don Bosco prophecies of a land which would be someday Brasília, Civitas Pacis Aeternae. He followed his dreams and of his grandsire Jan André Van Eyck and came to Brazil by the beginning of the 20th century.

He lobbied and was in charge of the financial aspects of the tasks of moving the capital from Rio de Janeiro to the interior, even going to USA to study and get a MBA at NYU. He was at Goiânia when president Juscelino Kubitscheck made his nocturne speech promising the new capital inland. Then the dream came and Brasília was founded, with Van Eyck as Prince. He endorsed a Malkavian prank when João Goulart took presidency, and suffered the intense backslash when the Ventrue instituted the military dictatorship as reprisal, lead by Don Sebastião de Avis. Several years he spent in exile, returning when Odin, his sire, took Praxis at Van Eyck long absence.

He was known to be killed by the Sabat during an attack by March, 2005. Only his tattered clothes and ties were found with some of his ashes inside his car. They were buried by Moira and a statue in the Gallery of Fallen Heroes was made by François D'Lumière.

By mid February, 2011, he appears again at Brasilia's court. His identity is confirmed, but not even him knows what happened those almost 6 years absent...

Eventually, as one of the few of founder members of the city still alive, he reluctantly assume the praxis. This does not mean he will hand it to anyone...