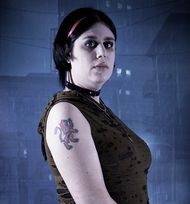 Slightly over 6 foot in height, dark brown or black short bobbed hair and warm dark brown eyes. Usually has colored streaks of a longer length worn on the right side of her head. Her personal fashion varies from school girl to cyber goth, but is most often in Kikwear pants and a t-shirt, also glitter, lots of glitter. Sometimes she has a silver fox tail, an actual moving tail, visible.

Born in Chicago, IL to German-Jewish parents Cheza discovered at a young age her oracular ability. She also discovered techno music and raves causing her to drop out of high school to become a DJ going on tour both within the States and then Europe. It was in Bonn, Germany that she ended up first being Ghouled and then Embraced by the Tremere. Cheza remained in Bonn, Germany until November 2008 when she moved back to the US to Amador, CA.

Cheza then moved to New Haven, CA where she eventually served as Sheriff to four different Princes. She then moved suddenly to Sacramento, CA which depending on the story was either because of issues with Clanmates in New Haven, something with Lupines or because Archon Peter Premysl wanted her. Regardless Cheza has seemed to come into her own in Sacramento and even served as Sheriff under the former Prince Jackson Riley. Since Jackson’s, as she puts it, murder - Cheza’s demeanor has become darker and she more distant. Was last seen January 1st, 2012 until the May Gathering in Berkeley when she made an appearance in disguise. She ended up being escorted or forced off Elysium by Archon Peter Premysl to reportedly be executed, supposedly for being a diablerist. Archon Peter Premysl was later stripped of Status by the Prince for his actions in violating Elysium.

No. However she does have an unknown number of ‘friends’ that she is fiercely loyal to.

And a number of other Kindred she doesn’t publicize.

Nope, is an only childe as far as she knows.

Frowning: "I’ve run out of drugs to try...that includes the Setite ones and kalif. Don’t ask.”

"I'd just like to grab a number of people and bash their heads into a wall, until they either get it or their brains come out...is this what it feels like to be a Brujah?"

“Oh my gods, I’d rather read a book then go through that again.”

“What? I liked Twilight!”

“My mind should probably carry a disclaimer for those going to break in with Telepathy.”

Random Tremere: "Elliot, what is wrong with your grand-daughter?"
Elliot Maxwell: "Many things. What'd she do now?"