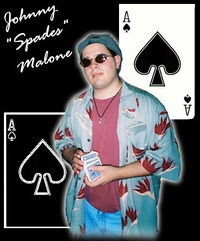 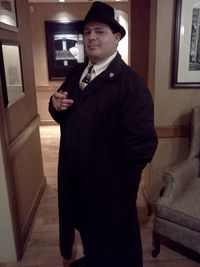 Spades is considered the "pretty boy" Child of Haqim. He's blond, blue-eyed, and devilishly good looking. He's not particularly tall, but carries himself as though he were. You can usually find him wearing a very loud Hawaiian shirt, a Charlie Sheen-esque bowling shirt, or an obnoxious T-shirt boasts his sexual prowess. Other times he can be seen wearing sunglasses at night and a cabbie cap.

Card Shark. Ladies man. Warrior. Spades has been around the Mid-Atlantic "block" for a while. He's rarely seen without a deck of cards in his hands or a woman by his side. In late 2002, he charmed his way into the court of Philadelphia from London and was quickly made Primogen for the Children of Haqim. He then worked his way from Scourge to Sheriff. During his time in Philly, Spades wooed the women and made political moves to give future Children of Haqim respect in the city.

Around 2005, Spades moved to Baltimore to help the city politically and with it's Sabbat problems. After a year, he went underground for reasons known only to him. In the late Summer of 2010, he resurfaced back in Baltimore, claiming he spent his time catching up on the Harry Potter books. No one believed that and chalked it up to Spades being his usual wise-ass self. Then again, no one has ever asked the real reasons why he disappeared. Now, he's looking to pick up where he left off. 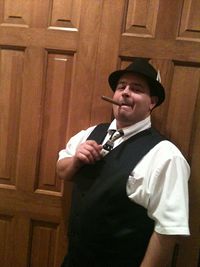 Anyone Spades tends to piss off.

A man that Spades only refers to as Mustafa.

None at this time. 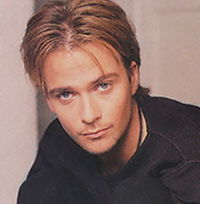 "I don't cheat at playing cards. I only know how to so I can catch cheats. If someone was cheating and I didn't catch it, I applaud them."
~ On card cheating

"You know, I've got a built-in silencer to help with that little noise problem of yours."
~ On stupid Kindred

"We can sneak away for a quickie. I GUARANTEE no one will hear us."
~ On sex

"If this gathering gets any livelier, a funeral is gonna break out."
~ On boring Elysiums

"Excuse me. There's a tall beautiful glass of Brujah I need to talk to."
~ On seeing Razor Eddie for the first time.

"Everyone asks me what Assamite blood tastes like. I usually say it's kind of like a buffet. A little bit of everything is in there."
~ Answering a truly difficult question

"I'm the loudest Assamite you'll ever meet. You can hear me through my own Silence."
~ On his personality

"I really wanna ask him, 'What's in YOUR wallet?'."
~ On clanmate Bjorn's viking nature

"I eye-banged so many women that I seriously need Visine."
~ on the 2012 Glitter & Gloom Event

"Roxy Codone...now there's a drug I'd do all night."
~ after a dance with the aforementioned Brujah