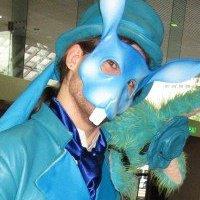 Alias(es):
The Blue Rabbit, The Black Rabbit (CoH Only: The White Owl)

Alabastor first arrived in the United States on the night of the Grand Masquerade Ball in New Orleans in 2010, after which he established his residency in Baltimore and quickly set his place as Primogen for the clan with no contestion from the clan.

He is seen all over the country, hopping from domain to domain to help where he is needed. Most nights he can be found in the Mid-Atlantic, but he seems to suffer from wanderlust and will occasionally leave his domain for extended periods of time for reasons unknown.

At the Grand Masquerade Ball of 2011 in New Orleans he was seen wearing a Black Rabbit mask, leaving many speculations as to the meaning behind the mask.

At the Midwinters Ball of 2012, he was seen with Razi Massoud on his arm as his date for the evening.

Has fallen silent in recent nights for reasons unknown. No one in his domain have seen him since June 30th when he claimed to be "entertaining" a large group of clanmates.