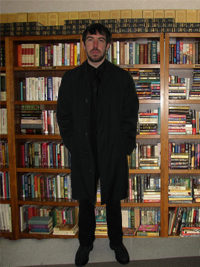 Lucas arrived in Baltimore in the fall of 2009. His general methods seemed to be to have occasional conversations and to glare at people. In the fall of 2010 he stood toe to toe with a Tzimisce elder, spoke with the dead Seneschal, and exited a private room from conversation with Vincent Velario and Kalo covered in blood. Afterwards he became the Sheriff for almost a year and was elevated to the position of Seneschal when Vincent Velario claimed the Domain. In the fall of 2011, he killed the individual previously known as Entreri Giovanni. He is known to deal with the day to day affairs in Baltimore.

In the summer of 2012 Lucas claimed the throne of Baltimore. There has been a great deal of discussion and concern as to what sort of Prince he will be. Will his reign be a bloody one? A short one? An efficient one?

On Roosevelt Island Morgan assisted in apprehending Archon Saul Good after Prince Datillo Bloodhunted the Archon. How will this affect his own Domain?

The answer to that question, for better or worse, is the Praxis of the Domain by Luther Rommel and Lucas being Blood Hunted for undisclosed "crimes against the Camarilla and the Domain."

Lucas' Blood Hunt was removed by Luther Rommel one year later and since then Lucas has become the Sheriff in Northern Virginia under Mattias Roman.