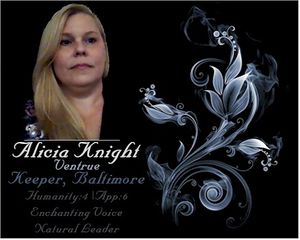 Physical description: Alicia usually looks the same, at least since she changed her appearance upon her embrace. Usually found wearing a dark suit with an offset blouse, low heeled rockport dress shoes or Mary Janes round out the outfit. Her hair is usually in a French twist, pony tail or otherwise pinned up. For jewelry she almost always wears the same thing. A torc around her neck with a plus (+ versus cross) pendant and several silver chains that disappear down her shirt, many silver rings with sparkling smaller diamonds and some matching earrings less noticeable in a darker stone. She is of average height at 5'5" and while decidedly pretty she seems not to notice, so other than occasional dark lipstick she opts for minimal makeup. How she carries herself depends on who she is with at the time. She looks high humanity but doesn’t always act like it.
(Gorgeous x3 (6 appearance related traits) - Natural Leader, Enchanting Voice) 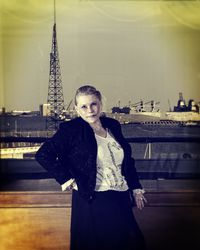 Until recently you might have thought that no one knows Alicia Knight fully - even those closest to her.... Whether that is because of her tainted beginnings due to her former regnants or Sire, or her increasing difficulty to be what is needed of her without changing remains to be seen. But it has taken a toll on her and it might only be her humanity that keeps her where she is and why she now clings to it so desperately. But who can be sure.

In her early nights she had an uncanny ability to get into tight spots over the stupid stuff and out of them with guile and patience, and was generally otherwise rarely heard from. Then for a long time, it seemed like she'd "Been there done that" and just kept to herself unless she was helping someone, or working on whatever the issues of the Domain had been. She was deeply involved in politics for a little while but it seems like she's stepped completely from the spotlight since stepping down as Seneschal. After being kidnapped by an infernal minion, trekking (sailing) through the bowels of hell for a “shard”, and standing on the front line in Baltimore’s fights against The Fallen and his infernal demons, she appears unscathed... Whether it is politics or some other motive, she has once again taken on the position of Keeper of Elysium. With a history like that, who knows what the future holds...

Some might remember her as "Ginny the Ghoul" - A quiet and resourceful Elysium regular that caught the attention of more than one Ventrue while in the "employ" of a local Toreador...
Embraced by Marshall Duran who was destroyed for "Crimes against the Camarilla" she was left to fend for herself in a world of many enemies and few allies. Her known history is long and while dotted with trials and betrayals, she has always called Baltimore home. Alicia is friendly and quick with a smile and always seems happy to lend a hand wherever she is...
Nowadays she’s usually on the front line, board room or helping out someone. 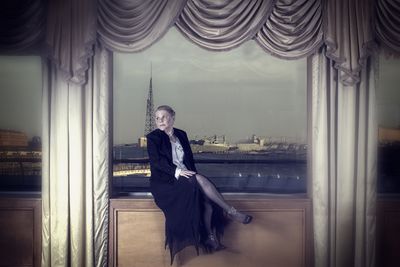 The Current Soundtrack
I told you I was mean - Elle King (Courtesy of Scarcrow.)
Wrong Side of Heaven - Five Finger Death Punch (Truth!)
The Light - Disturbed (Because we all need a little hope.)
A Little Wicked - Valerie Broussard (Aren't we all?)
Throne - Bring me the Horizon (pretty much says it all...)


The Road So far: (Previous but still worthy)
Carry on my Wayward Son - Kansas
Away from Me - Evanescense
My Heart Belongs to Daddy - Marilyn Monroe
Anywhere - Evanescence
Love Doesn't Frighten Me - Blondie
Show me the Way - Styx
Everybody Wants to Rule the World - Lorde 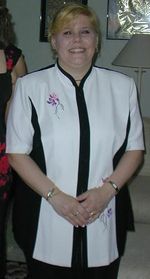 
"If you mean boons we can discuss that, if you meant boobs, well mine aren't for sale, they're priceless." - 2012


"To be perfectly clear - I do not want your job, nor is it my intent to undermine or question your authority. However, I do not mistake service for servitude, or confuse duty with dispensation." - 2012


While discussing her involvement in the recent Praxis attempt with (Prince) Luther Rommell - amidst a room of Gangrel itching for her blood... (Turns OFF Majesty) "I've said my peace, if you want your pound of flesh, we can step outside." - 2013

"If I ever run into Ben Miller, one of us is unlikely to escape alive. I'm fairly certain that someone is me, but such is the nature of our existence. Besides, everyone needs a nemesis." 2016