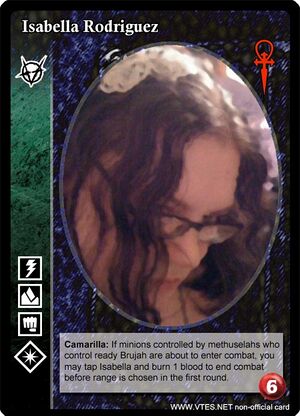 Physical description:
Isabella is of European Hispanic decent. She wears a variety of clothing depending on the needs of the domain. She is able to dress up for events or dress for combat. All of her clothing looks very well put together. Her voice has a small accent, but she usually covers it up unless she gets very angry. Her cheeks and face look flushed (Blush of Health) and she appears to breathe most of the time.

Isabella was born and raised in Spain. She was born to a noble family, but turned to the church during a time of great personal peril. It is through this one action that she was chosen by her sire. She spent many years with him, more then several human lifetimes before she was embraced. Upon completing her Accounting, she moved to Milwaukee, feeling rather hurt her sire sent her away. She has worked hard to continue his teachings and work in Milwaukee amongst the community, and spends most of her time with mortals.

None. Not now, not ever

She was actually written up from a dream I had

When You Go by Jonathan Coulton

There in the frame of your face, in the cast of your eyes
I saw this coming but still I am caught by surprise
All of this time I knew
That I'd be losing you
That doesn't mean that it's OK
That doesn't mean I'm ready

Some things you always remember, some things you forget
No way to make it up now, no room for regret
That's no good for anyone
And so I come undone
Now I am less than what I was
Whatever's left is yours now


"The only leather I own is my corset." - Isabella when asked why she did not own a leather jacket


"He is the type of Brujah that makes me want to beat him into torpor with his own leg."


Eddie Dervish and Ambrosio Valez de Leon were arguing about drinks at the 2011 Northeast Event. Isabella walks up, pulls them both to the bar** "I'm buying. Place your orders ladies."


"Wait, she's stubborn, argues about everything and pulls strings that nobody can see? That sounds like Isabella!"


"My home is in ashes now, and my Knight is now my Guardian Angel." -- Isabella about Ambrosio


"Paul lived by the spirit of the law. In the end it was the Letter of the law that killed him. We would do well to remember this." -- Isabella