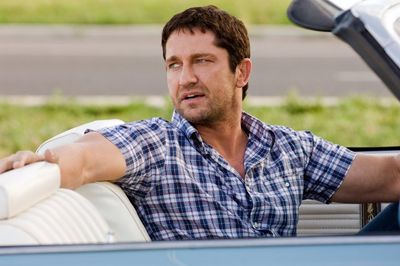 Physical Description:
Eddie is a pretty big and brawny white guy that always wears loose fitting jeans and a button up collared shirt with the sleeves rolled up. He rarely dresses nice, beyond that and will simple never be seen in a tie. He wears sandals rain, shine, hell, or high water.

Eddie has always prided himself on being one of the guys, and this comes out a lot when you meet him. He pats his friend on the back and really tries to make everyone feel at home. He has a very easy voice to listen to. He has no problems making decisions and has strong confidence in the decision eh makes, so it is very easy to follow his lead. Some who would call him a Natural Leader. When he gets angry though, a very different side of him comes out. He rolls his shoulders and has no issues getting up in your face. He can be very intimidating at times, and when he gets pissed he looks like one of those Bruisers from a bad Mafia movie.

For the most part though, if you keep friendly, he will too. He is always cracking jokes and luring a room full of kindred in a game of questions, to get them actually asking the darker questions, he knows they all want to ask. "Its fun watching the fallout of removing all the Kindred's fear, and see their real opinions come out." 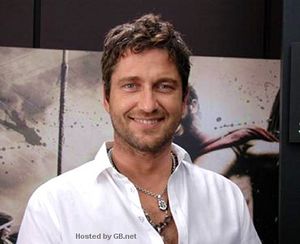 Eddie is known to be a pretty laid back guy. He cracks jokes with most of the gathering and generally tries to get everybody to not take themselves so seriously. Often he is comfortable making fun of himself to get all the Vampires around him to relax. He likes to invite all the stuck up Camarilla kindred to sit down and play a game his old prince taught him, simply called "Questions". The premise is very simple. In the circle, you can ask anybody any question you want, that they have to answer truthfully, as long as the judge doesn't think the question is inappropriate. Eddie usually volunteers to judge.

When he isn't having fun with his local clan, he spend his time making an honest living as a car mechanic; owning a small chain of repair shops creatively dubbed "Eddie's Repair". Mostly though, he is known for his love of women, and his willingness to carry on a loving relationship with another kindred. Though to date all of his known relationships have resulted in last feuds between him and the female Kindred. He professes that sex is the most human thing one can do, and if our goal is to truly remain as human as possible, there should be nothing wrong with intercourse. Needless to say, a great many other kindred find him crass, inappropriate, and just stupid for his penchant for bringing up this awkward topic in many a public conversation. 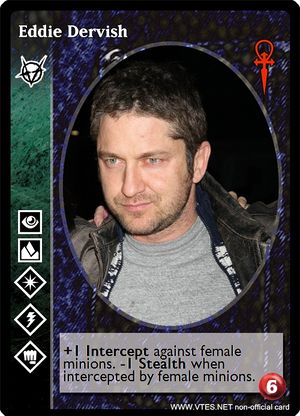 Eddie is from the back country of Illinois. Out there he lived a relatively uneventful life, not expecting much out of life. He had a few dogs, a bunch of tools left to him by his father who died when he only just became an adult. His mother left him long ago for his bad drinking habit, so he was the only one there to inherit the shack and little bit of land out in the woods. Eddie paid the bills by buying Junker vehicles for pennies and fixing them up. He also did work on just about anybody's car who knew he could, for enough to keep food on his plate, and beer in his fridge. He went to the local bar for pool now and then, and then, but never had enough sense to commit to any relationship, so he never had kids. That was pretty much his life, and it wouldn’t' have changed, had Joseph Payne not ran off the road that night.

Eddie says that he heard a pretty bad crash when he was watching TV on night in 2005, probably one of the many movies he got from the "good channels". He grabbed his shotgun and went outside to investigate the crash on his street.

(((More to come, when I work out with Dennis about the embrace scene.)))


Max is a poor girl that was getting fucked up by a bunch of dudes doing what they do to defenseless girls in the middle of the night. I aint gonna elaborate further. Well I was hunting, and I get a whiff of blood and other more personal bodily fluids, so I round the corner to check it out. Turns out this group of kids finished what they came to do, and had just beat Max past the point of no return. They were going to kill her, so she could identify them I am sure. I just looked at Max dying there, and then to the three guys. They took this little girl's life because they wanted to get off. It was sickening. I remember wanting to vomit, and then the beast had a different idea. I still don't regret cashing in my humanity on those fucking kid's heads. When I come to, I am looking at this girl. She wasn't hot; she was just an easy target. I wasn't gonna let her story end like that, so I put some blood down her throat, to ghoul her, not knowing she already passed that point, and she came to in frenzy, and now a full blown Brujah. She still hasn't forgiven me for doing that. She doesn't talk to me much, and I miss her. I hope she comes home one night, saying she at least understands what happened from where I was standing. 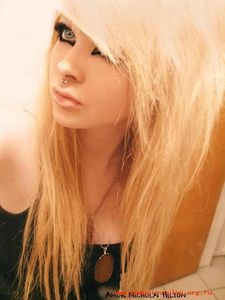 Melanie on the other hand was a kid that still loves her daddy. I ain't gonna talk about how I found her, but when I did she was all wound up in a Lilith cult trying to do shitty stuff to DC. We needed an in, so I ghouled her, and sent her back into the fray to give us information about where they were meeting all that jazz. She was down right pivotal in that cult being destroyed, so I kept her on. She is also a sadomasochist sex addict, one of the hottest women I have ever seen, and is completely enthralled with me, but that was only a small part of it. She stayed with me for a bit, and I stumbled across Right of Progeny, and she had been bitching about wanting to be a Vampire for a while, so I ran her through the ringer to make sure none of that Lilith shit stuck in her brain. She was only there for the crazy parties and rampant violent sex, and honestly, I completely understand, so I bit her, and we made it official. I took her under my Accounting, and she did a great job learning everything she needed to know. When she was Acknowledged, the dumb slut slipped up, and got put under ordeal by the prince for saying a comment about black people when the fucking keeper is black and standing inches from her. Now she stays at home till this ordeal thing blows over, and she can join the ranks of everybody else. I will be sad to see her go, but I feel like she will always come back when she gets lonely.

Melanie is a Vampire straight out of the movies. She is a rock solid babe, who wears tight leathers and miniskirts. This chick loves the black motorcycle and Japanese swords mixed with fully automatic weaponry, and a side of crazy Kung Fu shit I never taught her. I swear she would give Kate Beckinsale a run for her money if they ever do Underworld again. Her cliché does get on my nerves sometimes, but hey I am a leather jacket wearing Brujah car mechanic; I can't be too upset about clichés without being a total douche.

Secretly in love with Kate Davidson. It's why they fight so much.

Would be suspected of being a sabbat infiltrator, but he's way too obvious.

Among his most prized possessions is a magical, two-cup-size-increasing bra, given to him by Pierrot Francon, who bought it specifically for Eddie from Liana Masters at an "occult objects fire sale" in Annapolis.