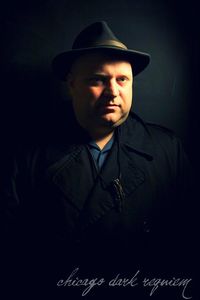 Physical description: Blackwood’s mask projects a man in his mid 30’s; shaven bald, a slight bulge in his belly and a nondescript round face. He is almost always seen wearing jeans, a dress shirt, black trench coat, a cane, black fedora and a carry on luggage case. While not unkempt, there is always a “frumpy” look about him.
Underneath his mask is quite different. Blackwood looks like a 75 lbs. dehydrated corpse with leathery skin drawn tightly over wiry muscle and bone. Sunken in solid black eyes, overgrown angular bone structure and porcupine quills for hair are seen when he decides to let others view his true appearance.

"Yeah... Coteries get killed. Consider me a consultant that helps with field work from time to time."

What enemies Blackwood has had in the past have a tendancy to... disappear.

Ya know that kooky old hermit guy that everyone kind of dismisses because he's unconventional and not a threat, just there to watch the youngin's get their game on and help out from time to time? Yet everyone goes to when they have no clue how to deal with something? That. And Grumpy Bear.

Elder Marathon "If this is a Brujah Meeting, why is that Nosferatu here?"
Silas Christian "It's Blackwood, he's going to find out anyway."

Curious Kindred "So who is this Blackwood guy?"
Devon Taylor "Blackwood... he thinks he's Batman."
-Blackwood peers around Devon Taylor's shoulder in obfuscate, sending the player into an athsma laughing fit.-

“He talks about historic events like he was there in person, because he was.”


“He breaks into Tremere buildings for fun, and gives them tips on how to improve their defenses.”


“He’s got such an impressive library, the Vatican calls him to see it their information is correct.”


“Archon Nick Tept has dominated Blackwood to appear every time he hears his name 3 times to make sure Blackwood is not spying on him.”


"He is so well connected, he has Justicars and Priscus on his speed dial."


"Is a damn fine mechanic."


“Blackwood beat out Michael Crawford for the part of ‘Phantom of the Opera’ but turned it down since he didn’t think the part was written accurate enough.”


"He's held every Camarilla position a Nosferatu can hold at one time or another for the city of Chicago, including Malkavian Whip and Primogen."


“When he says ‘a werewolf, a faerie and a mage walk into a bar,’ he’s not telling a joke, he’s telling you from personal experience.”


“He makes a mean tequila sunrise.”


“He’s got such mad hacker skillz, he sent Vista back to Microsoft the night he got it… fixed.”


"He is the most intersting Nos in the world."


"He was hand picked to be the Nosferau Clan Elect by His Lord Luminecent Justicar Lucian of clan Malkavian for the 1998 Conclave - Chicago, IL"

(Nosferatu only) "He jumped into a Niktiku pit to save a fallen Nosferatu and made it back out with him."