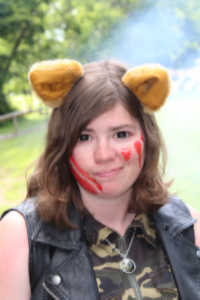 Puck as portrayed by the player, unmasked, circa 2017 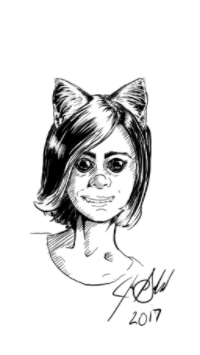 Puck as portrayed in illustration, unmasked 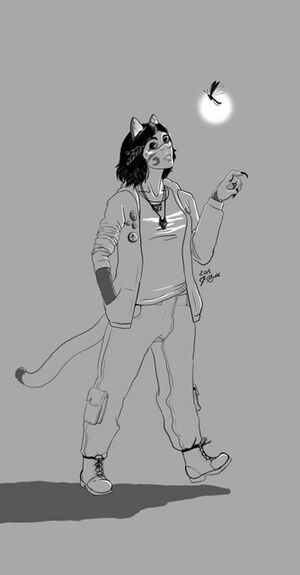 Puck as Portrayed in illustration, Unmasked, Circa 2018-Current 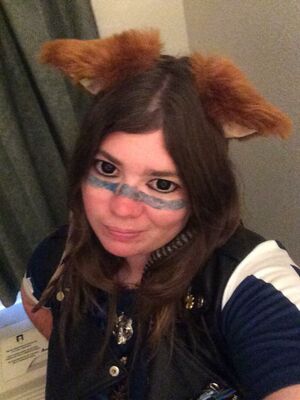 Puck as portrayed in by player, unmasked, circa 2018

Physical description:She is rather average looking if a little on the shorter side. Puck has an athletic build if not a bit wiry. Stands at roughly 5'5" in height. Has shoulder length brown hair, that isn't surprising if there is a twig or leaf in it from time to time, with mountain lion ears protruding from her head, deep reflective black raven eyes, feathers that are integrated into her hair and essential a part of her hair as some of her hair is feathers, fur on her forearms and a mountain lion tail. Often seen donning her camo jacket with many pockets adorned with trinkets from her travels and containing many things. She wears several necklaces including a brown seemingly almost wood carved owl necklace, a wolf head pendant, and a small oval rabbit necklace and one an intricate triangle design. Her face is often painted in different patterns and hardly ever is the same design twice unless on purpose, this is her "war paint" as she calls it.

She dresses casually generally in forest colors such as greens, browns and blacks, sometimes purple and often dresses in several layers reminiscent from her human years of always being prepared. Puck has been known to be able to clean up and dress nicely despite that she's always seen wearing her trademark facepaint even if for the evening it's subtle. The facepaint designs generally change from night to night. Her jeans, if she wears them often have a bit of dirt on them. She is often seen accompanied by a large Raven, her ghoul named Nevermore.

Puck came to Los Angeles in 2015 and spent much of her time trying to find her niche in the Camarilla society while placed under accounting. She was passed around in her accounting from a Ventrue, a Primegen named Bruce Jennings to the Former Senachal Matchstick Minos, a Nosferatu. She caused much trouble during her accounting and had a very loose leash on her during that time and had many 'watching out for her'. Her accounting wasn't exactly conventional to say the least. After about two years of this accounting of sorts she was released and became a proper member of the Camarilla Kindred Society. She learned under a Gangrel elder Wulfgar who rarely comes down off his mountain but had taken her under his wing to better educate her in the Gangrel ways since he was not too thrilled with the teachings or direction she was going in and took her up to his mountain to train before returning her to finish her accounting. She has always been very protective of her friends and makes them fairly easily.

In 2018 there was an incident that lead to her leaving the city and in 2019 she went to go live in Santa Rosa. As of late she has settled into Santa Rosa quite well and is even the Deputy Sheriff of Santa Rosa. She is currently engaged to the Assamite Primogen of Santa Rosa, Micheal O'Malley. She is also currently the Scourge of Greater Santa Rosa.

If you know you know

Something Wild- Lindsey Stirling ft. Andrew McMahon in the Wilderness
Phoenix - Fall out Boy
You Can't Take Me - Bryan Adams
Touch the Sky - Julie Fowlis
Reckless - You me at six
Fight Song - Rachel Platten
Champion - Fall Out Boy
War - Poets of the Fall
The one thing I have left - Hawk Nelson
Underdog - You Me at Six
Son - Sleeping at Last
Heroes in Defeat - Ulrik Munther
Hercules - Fly Away Hero