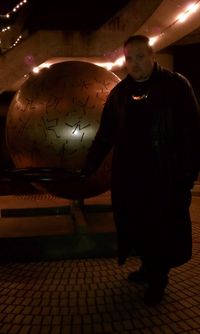 Fiercely loyal to Clan Tremere, sometimes to his detriment, he views the concept of his clan more as a philosophy and a way of life, rather than a machine which he is a cog.

Warchild has attested to his history as a mortal during the time the English were at war with the French. He has mentioned he grew up on a Man o War named the HMS Righteous Endeavor where he was a Gunnery and Carpenters assistant, as he grew older, he was groomed and placed as a Leftenant of His Majesty's Royal Marines aboard his same ship.

The first mention of the Kindred known as Winston Warchild in Kindred History was before the Bulchevik revolution in Moscow. During a bloody clan war the Brujah purged several of theirs, during that time Warchild has mentioned that he saw his Sire ripped apart by a mob of angry Brujah, of whom he has never forgiven or forgotten. Nearly losing his own life he left Moscow by aid of Irena Markov. He wasn't heard from again for another 15 years until when he was Acknowledged in Bonn Germany.

Warchild served Clan Tremere as a driver and security agent for other notable Tremere and guests. Not much of note was chronicled in the annals of Kindred History about him until he arrived in Santa Rosa California in the early part of the 21st century.

None at this time.

"True friends stab you in the front" Oscar Wilde

"You have enemies? Good. That means you've stood up for something, sometime in your life." Winston Churchill

That was really hard to weed out some of the other songs, I really wanted to add: IAMX: Think of England. which I think really sums up a lot about Warchild.

Rumors about Brujah and Warchild

Rumors about other Kindred