Concept:
Croatian Jill of all Trades, you want to trade, she's got it.

Physical description: Tall ?female? form covered in various layers of clashing clothes, with a veil that completely covers her face.

Little Bit, when seen, is usually shuffling awkwardly to or from a conversation where she speaks amicably through a thick slavic accent. When not seen, who knows?

Though she is generally pushing or pulling information Bit has a number of other useful skills that are occasionally sought after. Among these are her Vodka Rats, much loved by those with strong stomachs. 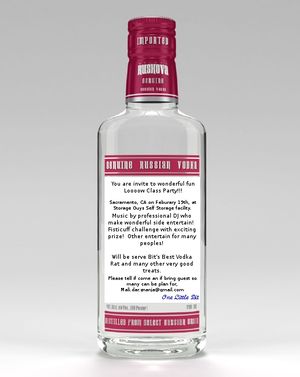 Bit was Acknowledged Ljubica Cirko in Sacramento in 2009 by Prince Jackson Riley. Her accounting was fairly short, however even given this Bit seems to have the ear of many influential people in the Sacramento area. She disappeared shortly after her sire, Maxwell Trent, was thought killed in a pillar of black flame. She returned to Sacramento in 2010 (some while after her sire's death was disproved by his reappearance).

Her first ever 'Loooow Class Party' was held the following week in Sacramento, to rave reviews.

Bit became Harpy of Sacramento on 3/12/2011. Her first act was to strip Prince Jackson Riley and Seneschal Allesandra Orion for their 'No Pants Tuesday' decree. She named Nina Harris her Assistant on 5/14/11, lending her Bit's Loyal name moments after Prince Riley gave it to Bit as 'recognition for efforts, within and without those dictated by position'.

Though Bit is generally very easy going she will at times indulge in the odd Toreador wrangle.

"You are new in town, neh? I am find many time when I am come to new place I am think 'Eh, is wery hard be in new place, I am need little bit of help.' You are find too I think some time, so now you are have my number and when you need a Little Bit, I vill come."
A card is pressed into your hand. It reads simply:
Mali.Dar.Znanja@gmail.com
You never know until you ask

Bit will buy any information you have.
The quickest way to Bit's heart is a shot glass full of vodka.
Bit's hatred for the Sabbat was fomented by her abduction and torture when she was first brought to court.
Bit's specialty is Vodka Rats
Bit has developed the ability to exhale spurts of flame after imbibing one of her famous Vodka rats