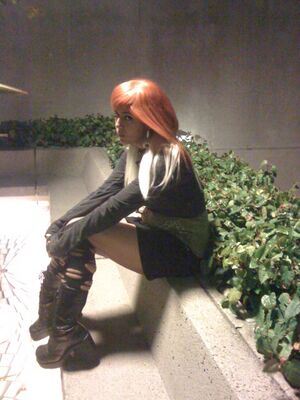 Physical description: 5'8", average build, red and white hair, tanned skin, spots on her neck, shoulders and forearms. These are believed to be on other parts of her body as well. She also had a large anatomically correct fox tail which she hides under long skirts or coats. Normal wear usually consists of pants, boots and biker jackets ("for mobility purposes"). She is, however, known to sport very fancy and often showy, feminine clothing at events and parties, much to the angst of her Sire.

Was Ghoul to Raven of San Francisco for at least two months before being embraced.


Her first night being introduced into the Camarilla as a Ghoul she assisted in the slaying of a number of Infernal cultists on Treasure Island. She served as the exclusive translator for the Kuei Jin upon their entering the Camerilla.

She served as Sheriff for Santa Rosa for nearly half a year.

She cared for a human child for 6 months, weening him off of a blood bond put on it by it's catiff father before it was taken from her and she was involved in a twisted plot of the Tremere. This resulted in a boxing for 8 months.

Anthy Himemiya from Adolescence of Utena

"That is a FANTASTIC stripper name!" said to Sweet William after being introduced to him.

"Lady Zaftig, you have just made me and many other people so very happy." Said to the Harpy Zaftig of Berkeley when given permission to stake her if the need should arise.

"We must learn from our mistakes, not allow them to be repeated."

"Don't bleach the cow!" Virgilia speak for 'Don't fuck up'.

"You want some wine? We got wine! Holy SHIT you should have some wine!"

"You're covertly dirty…I like you!" Said to Marcus Deems after one of his 'jokes'

"I think this is all fucking stupid!" When asked what she thought about the Sabbat truce.

"Thank god they aren't actually roasting him. I'm not looking forward to the day I have to collect his ashes, put them in a douche bottle, find an Asian hooker and run him through one last time..." At the Roast of her Sire.

"If they want to kill me over this, let them. I will die laughing at them. Not running and hiding. That's not surviving, that's cowardice."

"This is why we can't have nice things!"