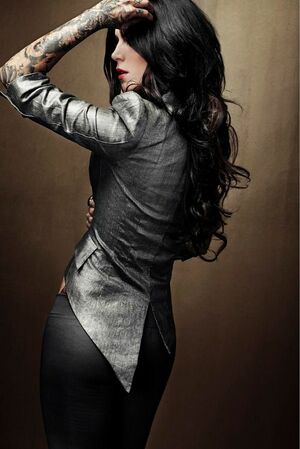 Physical description: Roxanne Maddox stands about 5'5 and has a prowling gait. With stormy blue grey eyes, olive skin, and black hair, her classic Italian features lend a severity to her stoic demeanor. She tends to dress in a way to reflect her professional nature.

- Feared given by Tom Anderson of the Old Dominion

- Loyal given by Prince Nelson Barrington of Old Dominion

- Valiant given by Sovereign Prince Rook of Annapolis

- Valorous given by Sovereign Prince Deems of San Francisco

Roxanne Maddox is no stranger to gang warfare and turbulence. Spending most of her time between New York, Chicago, Las Vegas, New Orleans, and Atlantic City has made an urban commando of the feisty young lady. Either way, her newest post in St. Augustine Florida is a curious assignment, decidedly lacking in glitz and glamour that marks her previous residences. Whether it's the Big Apple, the Big Easy, or now, St. Augustine, she's going to get done whatever she needs to do.

- Part of the St. Augustine delegation to a gathering in North Virginia. Roxanne was also part of the team that recovered the Toreador Primogen for Prince Oliver.

- Named a Deputy under Sheriff Ames Underhill of the domain of St. Augustine.

March 2020 - Attended a gathering in Baltimore where she was recruited into the Ivory Legion and spoke before the gathering to give a brief eulogy for Sovereign Prince Christine Strauss.

July 2020 - Was honored by Lord Tiberius to assume the mantle of Primogen of Clan Ventrue in St. Augustine.

February 2021 - Personally dealt the deathblow to two packmates of the Abomination Annalise Rowlands.

January 2022 - Hosted her yearly NYE party to wild success, with Justicar Lotharius himself making an appearance

Fuck around and find out

"The Hills" - The Weeknd

"Whispers in the Dark" - Skillet

"In For The Kill" - La Roux Skream Remix

"We are the clan of Kings. In leadership, we also serve... And it's not always what we want but... it falls to us to do what must be done."

"I'd rather not get staked with my own olive branch."

"Does it hurt? Feeling your being flake and ash into the dust of time? How does it feel? That final burn, knowing you failed to aspire and instead pass into little more than faded royalty..." - Roxanne whispering in a Kindred's ear as he ashed.