Detailed Status:
At time of death:

Katherine was discovered newly embraced in the woods outside of Birmingham, AL by Samuel Jordan. He brought her to Carrolton, the Camarilla stronghold during the retaking of Atlanta. Though under his accounting, his long unscheduled absences from laying siege to Atlanta weakened the bond between them and meant that Katherine picked up most of her knowledge about unlife, the Camarilla, and everything from other sources, including Mary Heartsblood.

At some point Katherine attracted the attention of Mel, a shadowy Nosferatu with a limb surplus. A chance meeting at Nonclave led to Mel following Katherine across the country, leaving her unsettling messages with birds. At some point, Mel snapped and diablerized someone else, leading to his execution. To this day, Katherine still will not talk to songbirds.

Years later, Katherine discovered a spirit embodied in a strange vine with flowers that produced a strange hallucinogen. After several unsuccessful attempts by other Camarilla members to destroy the plant, Katherine became its self-appointed guardian, nurturing it with crazy parties of orgiastic creativity. This drove a wedge between her and the rest of the Georgia Gangrel and cemented her reputation as a 'wild child.' When Samuel Jordan decided to put a stop to it by killing Katherine, he was surprised to discover that she was more than a match for him and put him into torpor. Finally, in a very tense meeting with Archon Erkon Mahir, Katherine finally convinced the Camarilla to leave the plant alone.

Katherine claims the plant has 'gone home', but still seems to have access to limited quantities of the hallucinogen.

Katherine resided in the domain of Middle Georgia, pursuing her own projects and throwing awesome parties, until Prince Brian Faulkner discovered she was actually in the Camarilla and named her Primogen of Clan Gangrel. She did an adequate job, with some explosive exceptions, but was able to pass the office off to Simon Random. Unfortunately, she remained saddled with the office in Atlanta.

As of the start of 2016, Katherine is publicly believed to be dead. Accounts of her continued existence remain guarded and unclear. 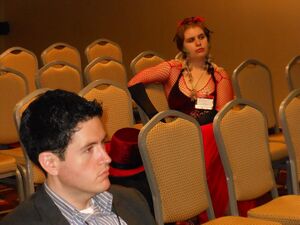 Katherine without her mask. Photo is completely OOC.

"Ultimate" Gogol Bordello
"Don't Stop Me Now" Queen
"Baba O'Riley" The Who
"Kids and Heroes" Bouncing Souls
"She's a Rebel" Green Day
"May the Living be Dead in Our Wake" Flogging Molly
"Damned to be Free" Bad Religion
"Rumors of My Demise Have Been Greatly Exaggerated" Rise Against
"All the Myths Are True" Abney Park
"Perfect Drug" Nine Inch Nails
"Bad Influence" P!nk

"So what are you now, the sex police?"

"You can be my bitches!"

"Can I borrow a car that doesn't have a Jolly Roger on the roof?"

"Sheesh. You blow up one elementary school..."