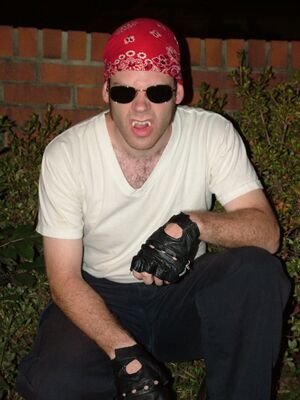 Upload He doesn't dress like this any more, but he's still got the sunglasses.

Physical description: White male with sideburns, sunglasses, and a little cross necklace made of rope. Usually wears jeans and t-shirts, has a Crafts x5 suit for special occasions. Uses Mask to cover his lack of Humanity, but it still shows in his body language. The picture is from 2004; he doesn't wear the bandana or gloves anymore.

Embraced Independent; joined the Camarilla in order to fight the Sabbat.

Someone else: "I like children."
Sam: "You shouldn't feed from children. It stunts their growth, and then you get small adults, and no one wants that."

Sam is with a group of Toreador who decide to call the Prince on speaker phone after going to a club.
Prince Brian Faulkner: "Are you drunk?"
Toreador 1: "No!"
Toreador 2: "Who? Us?"
Toreador 3: "No, of course not."
Sam: "I'm a little drunk."