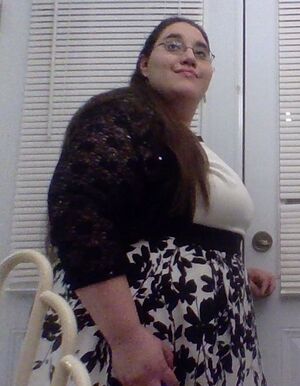 Alias(es): admits to having had many, has not shared any

Physical description: Catrina Sue has long reddish-brown hair, blue eyes, and freckles. She is on the small side for a 14-year-old. While not classically beautiful, Catrina is adorable in her own way.

Catrina Sue Maguire is usually very quiet and reserved; she used to be very predicable but has recently become a little bit less so. She speaks with a high-class antebellum southern accent. Previously, she would only wear long black dresses – or at least dresses – and was never seen without her wedding ring. Now, she often dresses more like a modern teenager and has taken up skateboarding. She has not worn her wedding ring since July of 2011.

Catrina is an extraordinary Seamstress and Clothing Designer. She also has some talent for drawing, but doesn't showcase it much. In 2009, Catrina began designing and creating armor. Soon thereafter, she began painting. Much more recently, Catrina has begun teaching herself to play drums and bass guitar, insisting that she is going to have a garage band as a rite of passage. She is also known to keep emu, a fact that some members of the domain simply won't let her live down.

Catrina Sue is known to see and talk to ghosts, a bit of an odd occupation in Middle Georgia. When asked about this odd trait, Catrina has been known to reply, “I've always seen them since I was little. It's because my eyes are blue.”

Catrina seems to gain inspiration from sources that most people shun and enjoys gaining this inspiration, although she often does not remember having gained it. It is known that she occasionally regresses in high-stress situations. When regressed, Catrina is quiet and often attempts to hide. When she does speak, it is with a Scottish accent.

According to her own stories, Catrina Sue was given as a ward to a man who turned out to be a Toreador. If her stories are to be believed, she was a ghoul on and off for him (mostly) and he showed her (and her sewing skills) off around the courts of Europe as a protege. In stark contrast with her current situation, as she doesn't tend to leave Middle Georgia, she was purportedly quite well traveled in her extreme youth and enjoyed making elaborate gowns and suits for European mortal nobility and Toreador. She tends to give evasive answers when asked about her relationship with her sire during this era, but whatever happened when she was allowed to age somewhat, he married her. Catrina Sue believes that her sire is deceased.

Her move to Georgia was early in the state's history; she admits to having owned a plantation and misses having large numbers of people in her house, although she strictly denies having kept people against her will. She fell into torpor intentionally just after the Civil War ended and awoke just before Milledgeville was taken by the Sabbat, a siege she missed due to visiting Paris with her protege. She has a formal-wear and dance-wear business that is very successful.

Catrina Sue carefully molded a single family through generations to be her front, and she still lives with them. Catrina insists that they are directly descended from British nobility. Catrina's ghoul, whom Catrina refers to as 'my mother', is one of the remaining members of this line and is not particularly sane. The ghoul believes herself to truly be Catrina's mother. The house that Catrina lives in is the one she lived in before she went into torpor, which has been kept by this family during the meanwhile.

When she returned from France in 2008, the Domain of Middle Georgia had been firmly established and Catrina rejoined it. She remained in the background, preferring to stay out of Kindred politics, and came to gather simply to visit. She found other souls with similar drives and befriended them. These people were often not Toreador and were also often known to be a little bit odd themselves. She graduated high school from a local homeschooling program in 2010 and has been in college ever since, seeking a degree in clothing design and psychology.

Catrina has recently taken in a moderate number of battered women (she calls them her girls) and their children. She offers them training in order to assure that when they leave her shelter, they will be prepared to take care of themselves and their children independently. Some of the locals express their doubt as to whether or not Catrina's training pertains to modern independent living.

Catrina's emergence onto the modern political scene was tentative. At first, she became a Lesser Harpy and remained so through several Harpies. Eventually, she was also entrusted with the Primogen seat. She had been Primogen of the Toreador clan for some time until early in 2014. It was very soon thereafter that she was given the positions of both Lesser Harpy and Deputy Keeper, although the latter is no longer a current position.

Lethians, a now defunct Coterie. No other Coteries.

Catrina has referred to him alternately as 'Sir James', 'Alessandro', 'my husband', and 'my guardian.'

Catrina Sue grew out of research that I was doing on Scotland and the late Middle Ages.

from my original notes dating back to 2002: