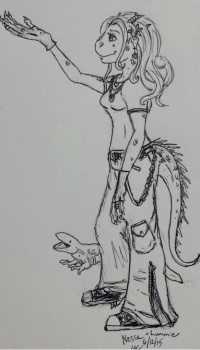 
Concept: She was in life a semi-professional wildlife and nature photographer, a passion she still retains, though under carefully guarded false identities. She loved to travel for her photography and as a former Military brat was accustomed to moving around and changing. She is very attached to her friends and family and is protective of those she is loyal to. She has a deep love of animals, particularly the cold blooded varieties and dotes on her pets. Recently she has begun working on a project to start breeding endangered reptile and amphibian species, and also more common varieties for the pet trade to help financially support the endeavor. She also spent her youth as a dabbling Computer geek, gamer and occasional hacker, and still plays occasional mmorpgs when she has time. She is still fond of online gaming and comic books, the latter strongly influenced by her brother Harlen after her embrace.

Physical description: Her most human feature remains her eyes, still bright and lashed with long dark lashes, typically a greenish hazel color but it does vary with her moods. Her nose and upper lip have melded to resemble a reptilian snout with a few ridges at the upper bridge of the nose and slitted nostrils. Her hair also remains almost as it was during her human life, a light brown color still falling to her shoulders in slightly lanky waves with thick bangs. From her head have sprouted 4 small dark horns, ridged slightly in the manner of antelope horn and barely peeking from her hair when it's loose. Across her body scales occur in mostly random patterns, tending a little thicker and patchier along her spine and across the sides of her tail. Her skin has a grey cast tending to lighter on her throat, belly and underside of her tail and most of the scales are of a pale lavender color. Her body overall is a little thinner than human but she retains a feminine form and slight figure. The tail is relatively short but muscular and is slightly prehensile. Horizontally it is slightly flattened with a spinal ridge of leathery spike/fringe down the dorsal surface. Her fingers have stretched to a longer more nimble length but as with the rest of her changes the fingers are tipped with blunt reptilian claws rather than nails and a few random little scales, her toes also have more claw-like nails. Typically she wears a hoodie, fingerless gloves, and a pair of worn and torn baggy Tripp pants, her tail escaping from a hole ripped in the back for comfort. She usually carries a messenger bag covered in pins, buttons and patches that gives an occasional wiggle of it's own accord.

When she (rarely) masks she is nondescript, the same hair and eyes and dressed in the same sort of Jeans and a hoodie combo she favors. She also always wears finger-less gloves.

In either form at gatherings there is almost always a huge Hellbender Salamander riding in the hoodie pocket or in the messenger bag she carries.

She first appeared in Washington D.C. around 2005, moved to Baltimore a few years later. She has been a resident in Baltimore for several years now and has been her Clan's Primogen on and off for years. She comes off as a bit quiet by nature, but being overlooked leads to people talking right in front of her, and underestimating her on a regular basis. She is ferociously loyal to her clan Family and protective of others that she feels need looking after, even non Nosferatu on occasion. She saw Jenny Talia as kind of an older sibling, and Harlen Miles was as close to her as a real big brother. She remains close to her clanmate Gary as well, and doesn't like talking about her early embrace days. She is also very comfortable in her appearance and regularly appears un-masked when it is safe to do so.

She is very fond of her pets, her Hellbender Salamander Lummox is a near constant companion and is rarely absent from her messenger bag or hoodie pocket.

Some may have seen glimpses of her other companion, though he generally remains underground and out of sight. An eerily intelligent and mutated, oversized, Asian Water Monitor with horns resembling those of his mistress, and he is tremendously protective of her.

She is also very interested in fungus and particularly mushrooms of all kinds and will sketch or photograph them if she gets a chance.

Since Glitter and Gloom 2012 she has regularly been seen in the company of Phillip Bankrofte whom she is clearly fond of.